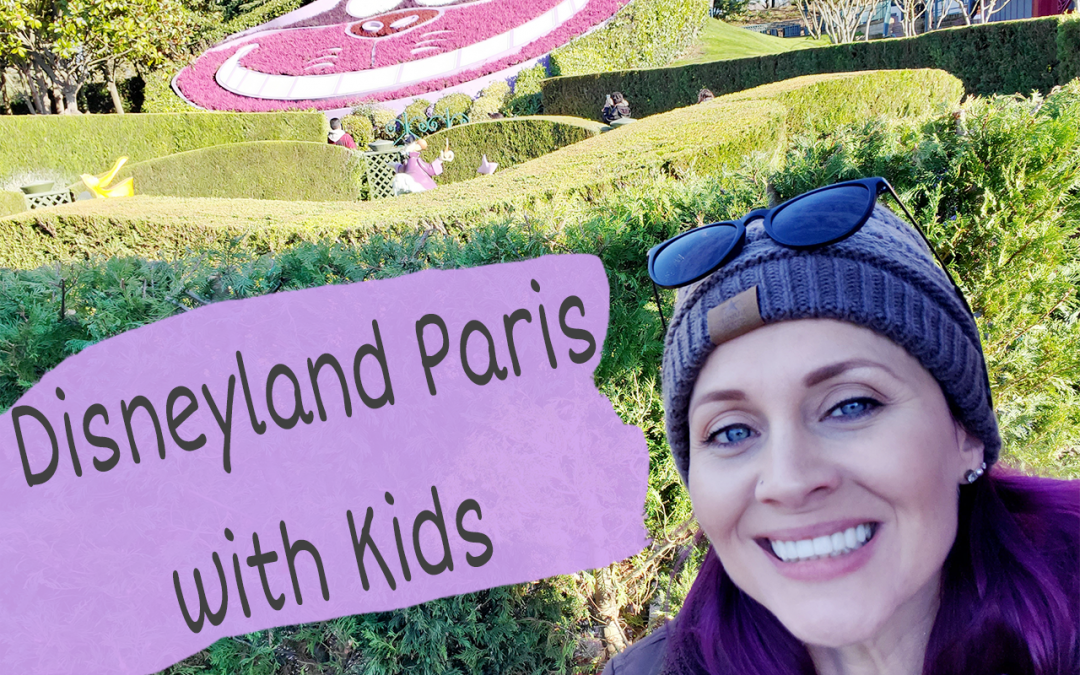 When we started planning our trip, we knew that we would have to add Disneyland Paris to our plans. Total bucket list item! Never thought it would happen, at least not for another 10 years but didn’t imagine I would be dragging the 2nd grader and preschooler transatlantic. Continue reading to find out how we managed Disneyland Paris with Kids.

First full day in Paris and we hopped a train right on out of there, headed for Disneyland Paris.

Prep and Research for Disneyland Paris with Kids

Like everything the hubs and I do, well 90%, we did our research ahead of time.

For an in-depth look at how we saved money on tickets, go here

We had looked at maps, park hours and YouTube videos to get a feel for what to expect. We laid our plans and had input from the princesses about our must-dos. Paul and I downloaded the necessary apps for success. 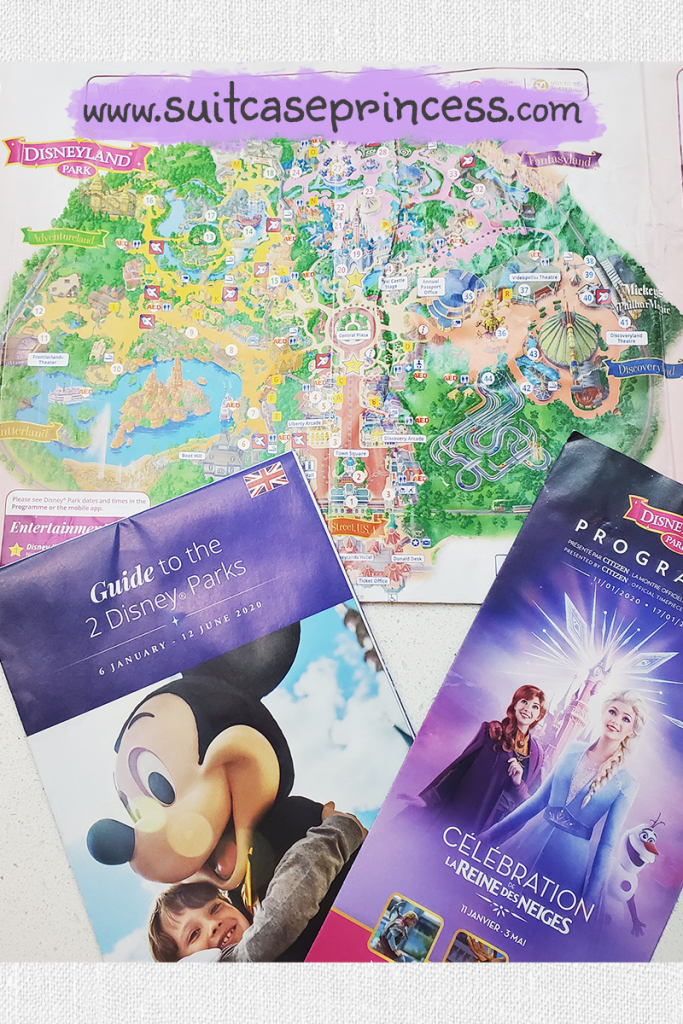 The rest of our travel party are not huge Disney people, but they’ll indulge me a bit. We arranged to do Disneyland Paris, the classic Magic Kingdom, with our 4 and the Bestie 4. The Bestie 4 is Nick, D, Gma T, and G. So totaling 5 adults and 3 wee babes. 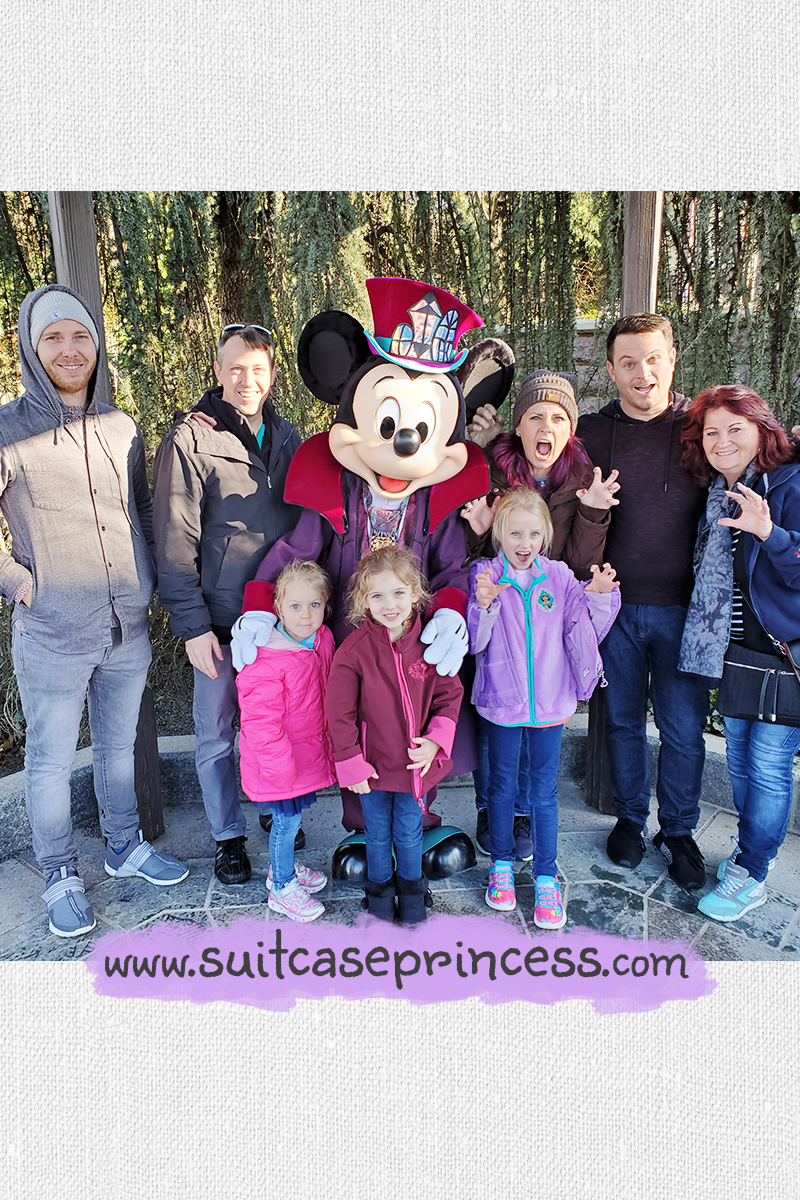 Park hours for the day were 10 am-6 pm, not as long as we are used to at DisneyWorld. These hours were actually pretty ideal. We needed to travel quite a long way to get there and wanted to arrive long before opening to maximize our park time. We agreed on a meeting time in the lobby of 7 am. We had breakfast in the hotel, FREE! Loaded up with our necessary travel and cold weather gear and set out!

This was actually our first day out of the hotel to do something since jet lag took a much larger toll on the girls than we had anticipated.

Paul had ventured out the day before to acquire our rail passes and to get a feel for our travel plan so that we would not be senselessly delayed.

Once arriving at the train station, my fear of getting on the wrong train subsided since it is so well labeled! 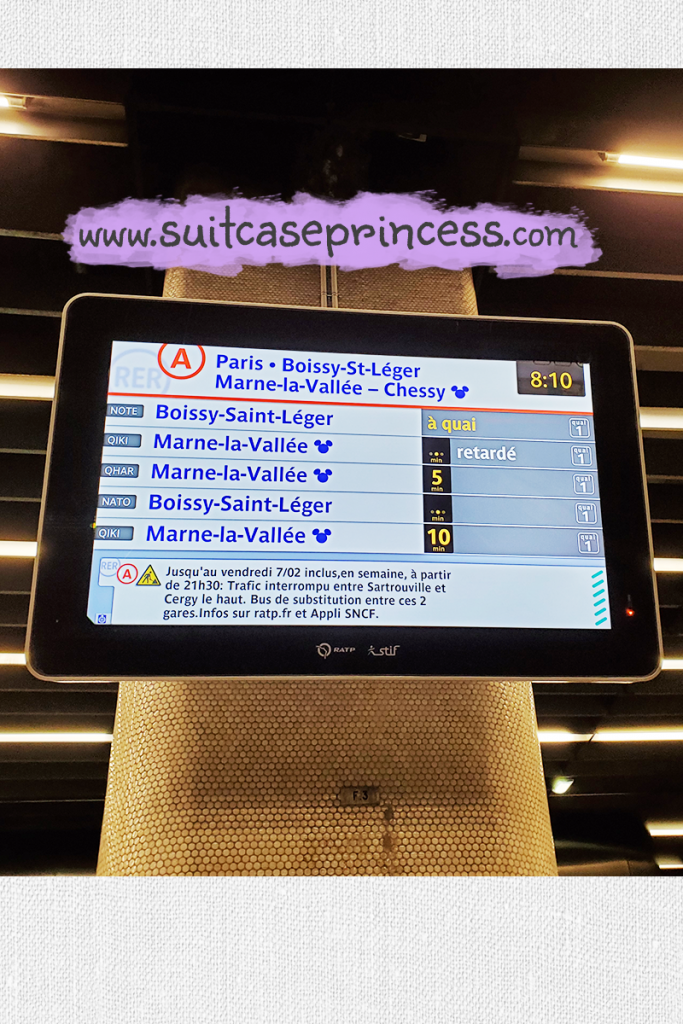 If you have any doubt about which train takes you right to the magic, then you just aren’t trying! Even the in train maps have a mouse head. 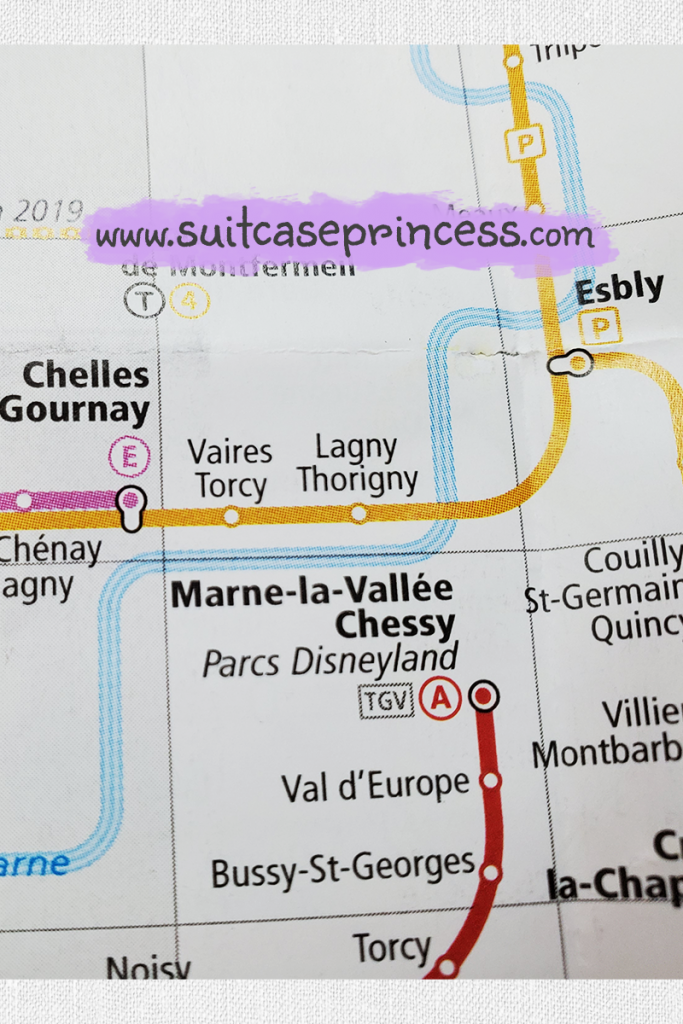 We had 2 backpacks for these day trips, one with what we needed in the park and one with some fun stuff for the train. Travel time from hotel to Disneyland Paris was a solid hour and a half with getting to the station and waiting for trains. The longest portion of that was on a single train, so I knew the kids would appreciate some easy distractions. I took their drawing boards as an easy no-mess activity. Added bonus, the pens are attached and can’t be dropped on gross subway floors. 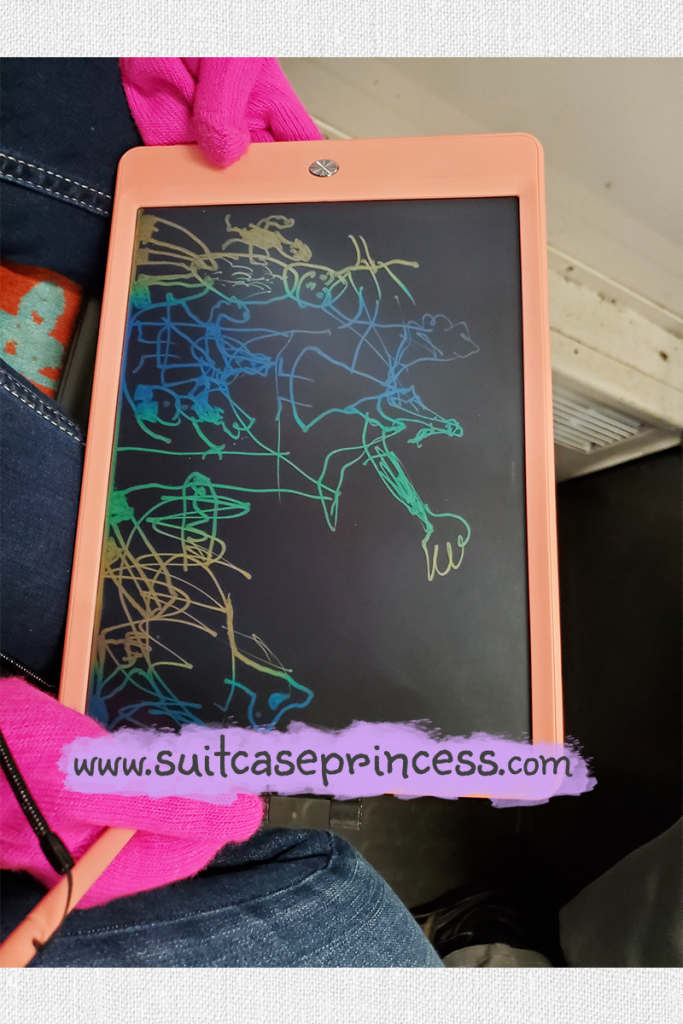 I do have to note that the Parisien transit system and stations are much more clean and well kept than the New York system.

You can find more about that here

The train pulls into an underground station and you come up the escalator right into the center of the magic!

It is the end of the line. The train waits, and heads right back into the city. The transportation to the Disney Paris area is pretty fool-proof and I was so thankful for that!

Security at Disneyland Paris with Kids

The security areas were also a much faster and easier process than in the American Parks.

You approach the green tent, everything goes through the conveyor scanner, you open your coats and walk through the metal detector. If anything alarms you try again. It was pretty smooth and quick.

We were early, as intended, so we headed into the Disney Village area. This linear shop-lined walk connects the Parks and Disneyland Hotel to the rest of the resorts. The area has a theater, arcade, shops, and restaurants, both quick service and table service. This is the Paris equivalent of Downtown Disney and Disney Springs, just a bit smaller.

Did I mention a Starbucks? I knew that being already several hours into our day a nice warm drink would really hit the spot in the cold climate. 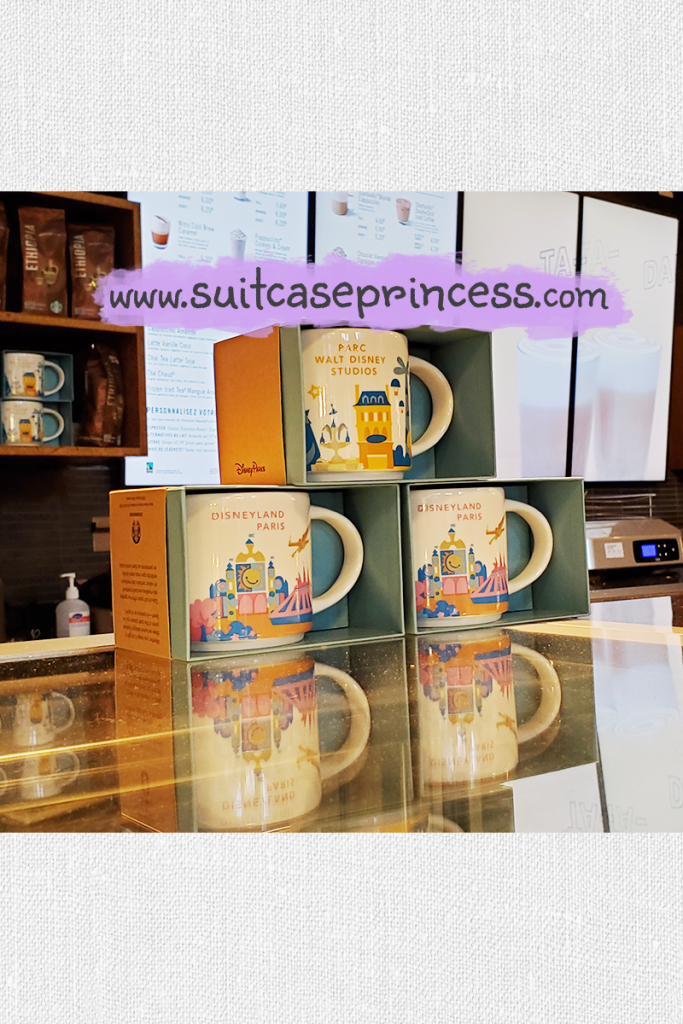 Everyone got a drink, coffee for myself and waters to fill our bottles.

We all beveraged and made a potty pit stop before we headed toward the gorgeous Disneyland Paris hotel. Upon approach we took a right turn and headed over to baggage check. The train station does have locker rental but only took euros, it was cheaper but we had none. So instead, we handed our extra backpack to a wonderful cast member, paid the 7 euros for them to keep our bag.

Later realizing we forgot our click sharpie for autographs. 😥 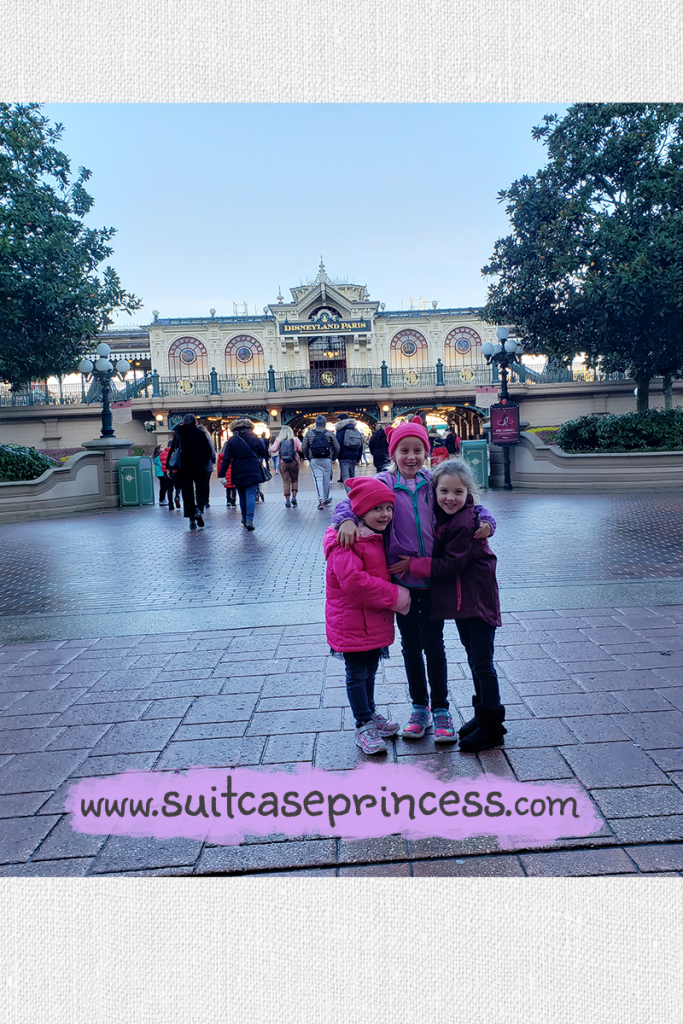 The entrance is located below the hotel, this allows you to emerge into the magic. It was such an exciting moment and our girls felt the excitement!

At park opening, there are character meet times made available via the Lineberty app. I snagged one, having no idea what it was for. More on that later.

We knew from our research we wanted to head left and hit Frontierland first.

We were able to head up, get a paper FastPass. If you are familiar, the way WDW used to do fast passes. The wait was very short so we figured, let’s ride now. We got in line, it went quickly and this was the right choice to start our fun-filled day. This is far and away the best version of this ride!

You take off at the dock, immediately plunge into darkness. The darkness is in fact a tunnel under the lake. You come out onto an island that is the rollercoaster area. It is thrilling and intense! You whip around until you are led back into darkness and safely arrive back at the landside station.

We loved it and luckily our FastPass time had arrived so we hopped back in line for round 2! 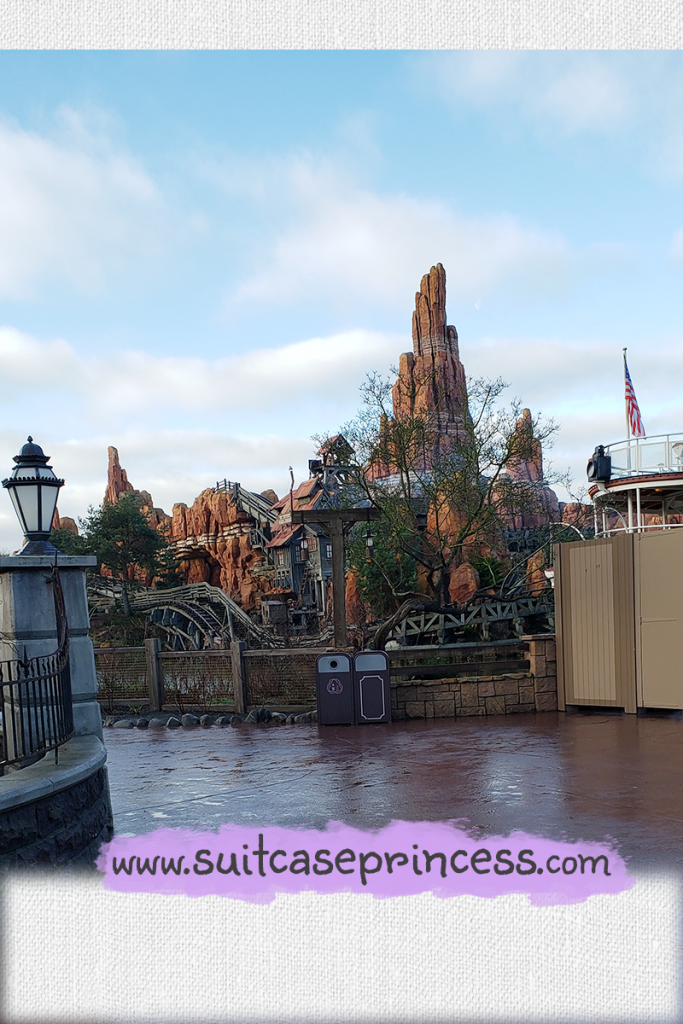 We tried to ride nearby Phantom Manor, which was down. Then later the app showed that it was up, then when we got there, it was down. This cycle lasted the entire day. We did finally manage to ride it and our doom buggy stopped just inside the graveyard scene for about 5 minutes. I will say that this version is much spookier than the stateside counterparts. No one in our group seemed to mind. We were able to escape before becoming another happy haunt.

We enjoyed the views. Disneyland Paris is truly gorgeous. I had read this before going but until you experience it, you don’t fully understand. 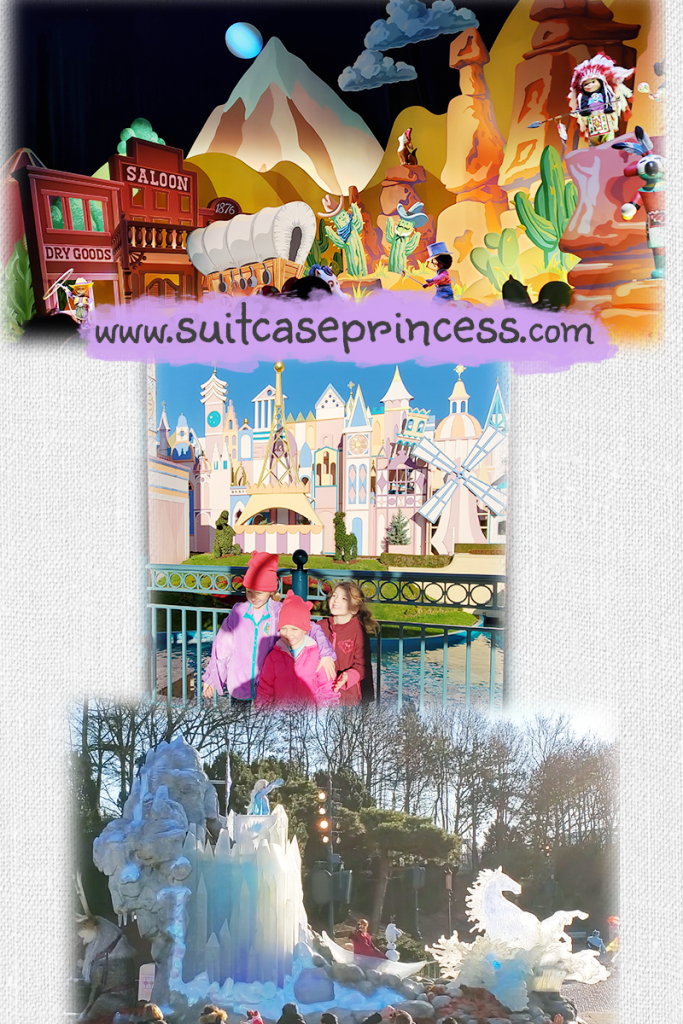 Small World was also very nicely done. I love every one of the versions of this ride. Each is so unique and so wonderfully consistent. The Parisian version has more focus on the Americas and the wild west. While in line, we were treated to the castle stage show beginning its trek from backstage to the main stage. We were able to wave and sing along while in line. It was a great view and we unintentionally timed it just right. The show that had just started its run was FROZEN!

Teacups were more closely modeled after Disneyland than DisneyWorld but the pavilion is stunning. 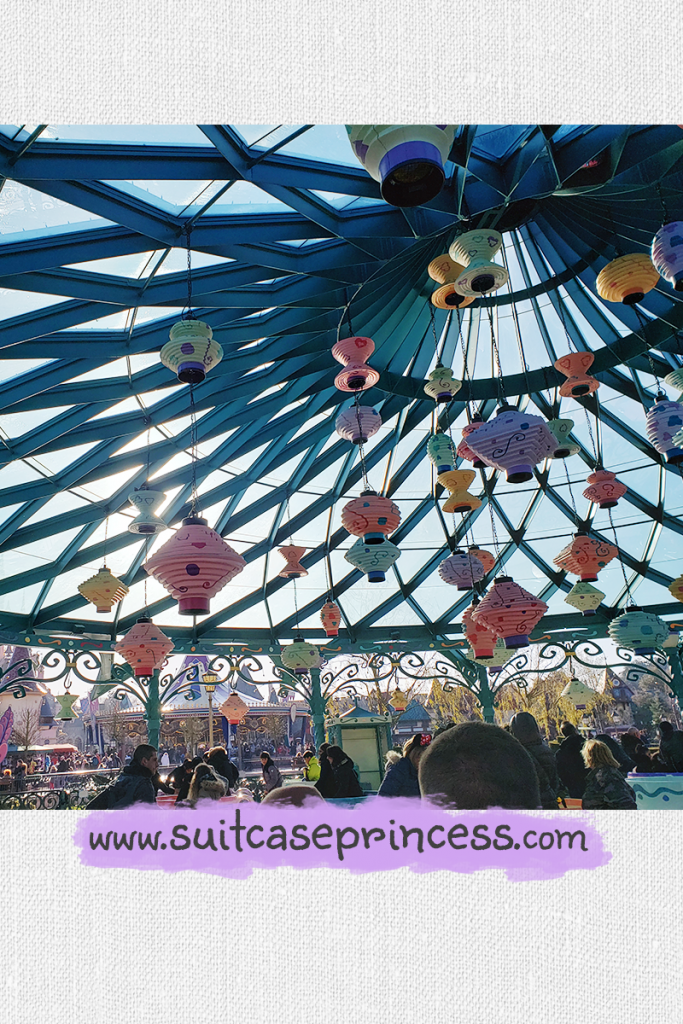 Pirates of the Caribbean also had a different storyline, which is quite enjoyable.

The castle is still Sleeping Beauty’s Castle but this one is a true work of art. Even the trees out front are perfectly modeled to fit into a scene straight from the movie. 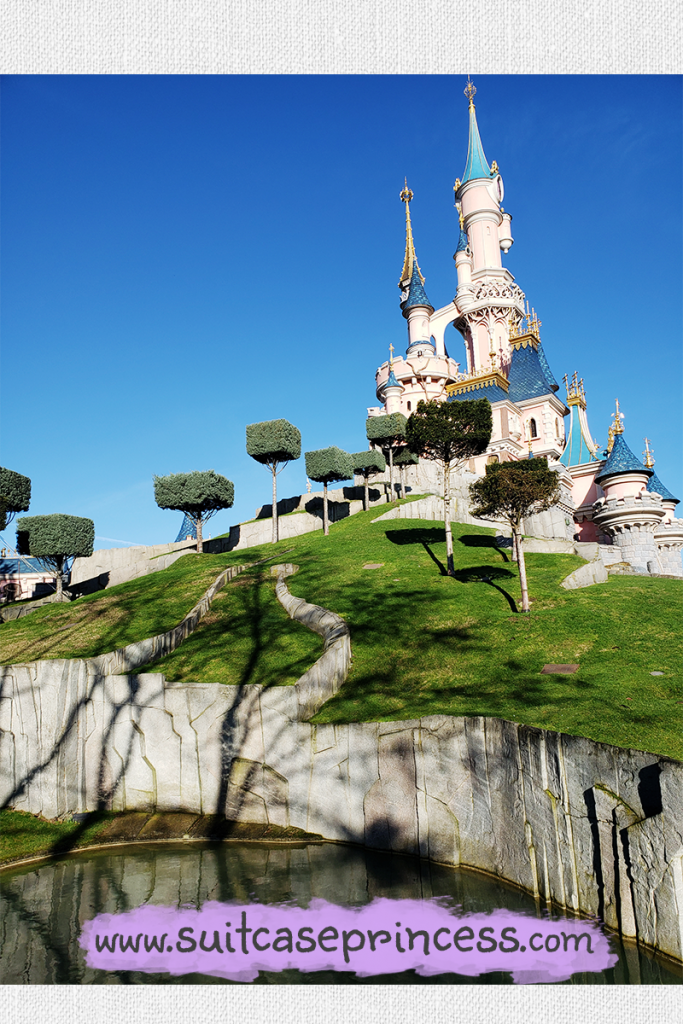 The classic parade was a nice treat. Again, being familiar enough but still totally new. I loved seeing the fire breathing dragon also seen in the 3 pm WDW parade. 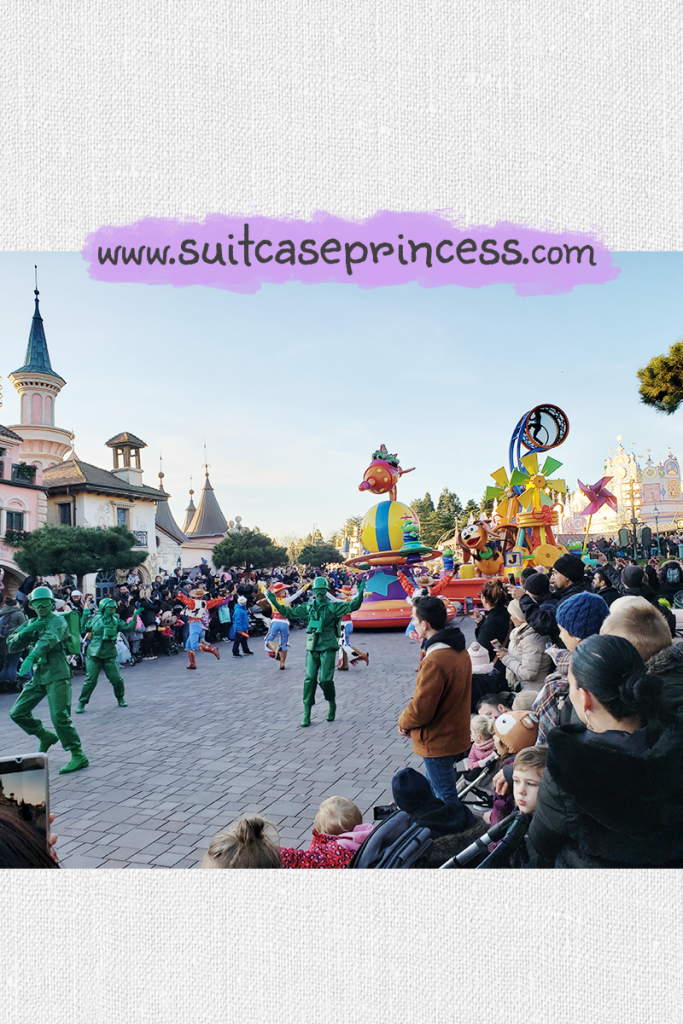 Peter Pan and Pinocchio also had slight variations. We enjoyed seeing the fairytale rides that have been replaced at WDW. As well as a small train and boat storybook rides found in California but absent in Florida. 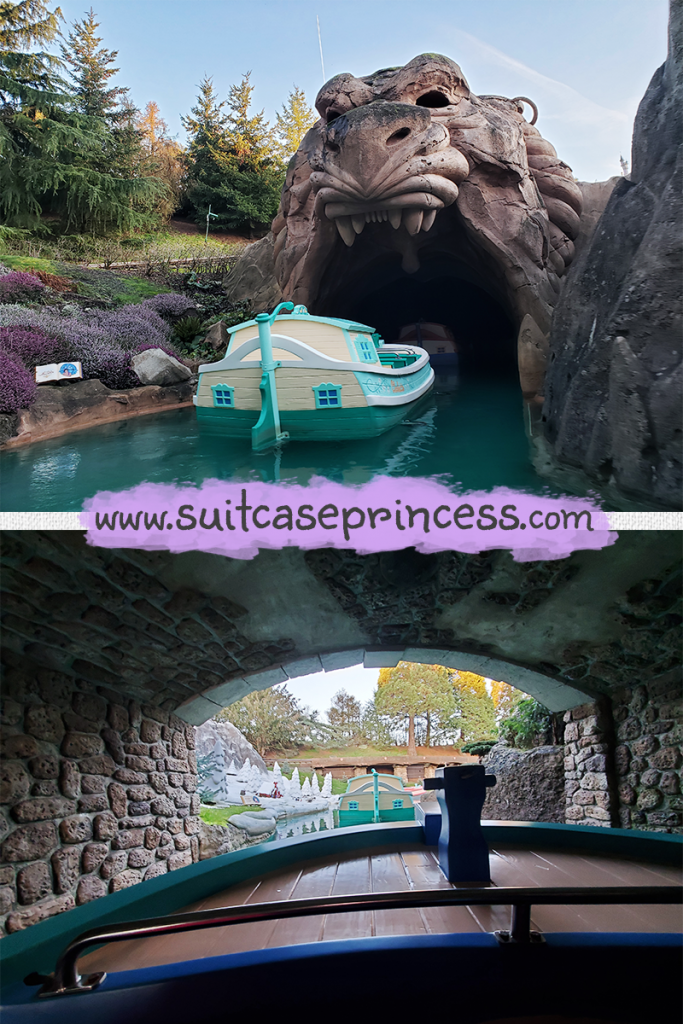 This park is far and away the most gorgeous Disney Park I have seen. I hear good things about Tokyo, I’ll keep ya posted.

You can tell that the attention to detail and decoration is important in this park.

This park has a dragon under the castle! It is amazing, it moves and it has glowing eyes. Hands down my favorite part. It was such a treat to go into the creepy cave and be greeted by this monster! 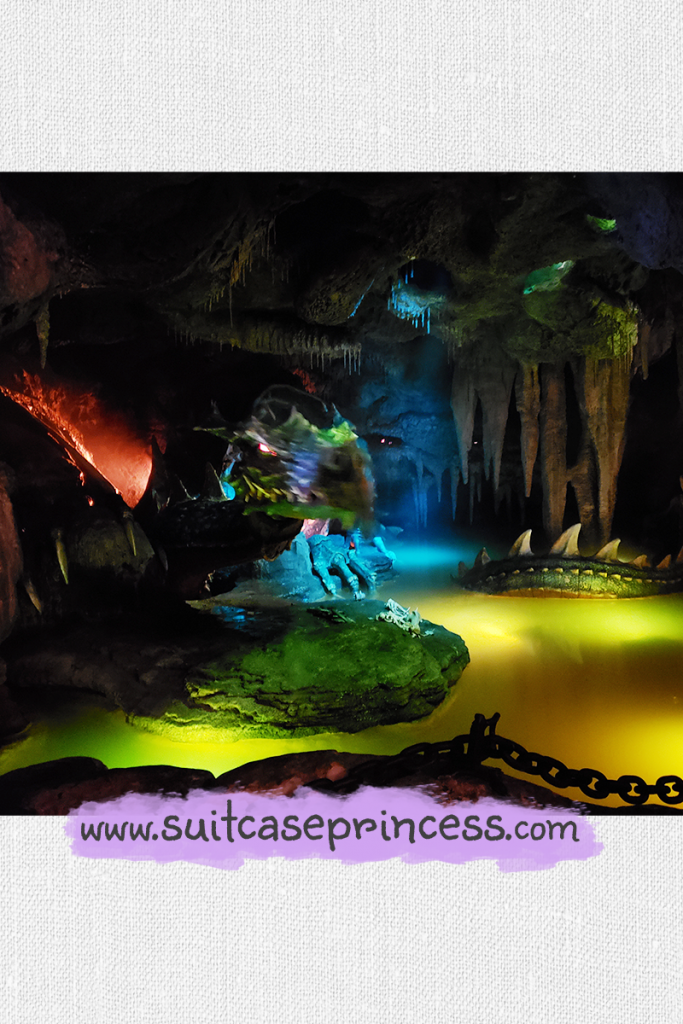 There is also a well-manicured labyrinth dedicated to Alice in Wonderland. You come across characters, signage, animatronics and flowers along the path. You can enter a castle and have gorgeous views of the park. 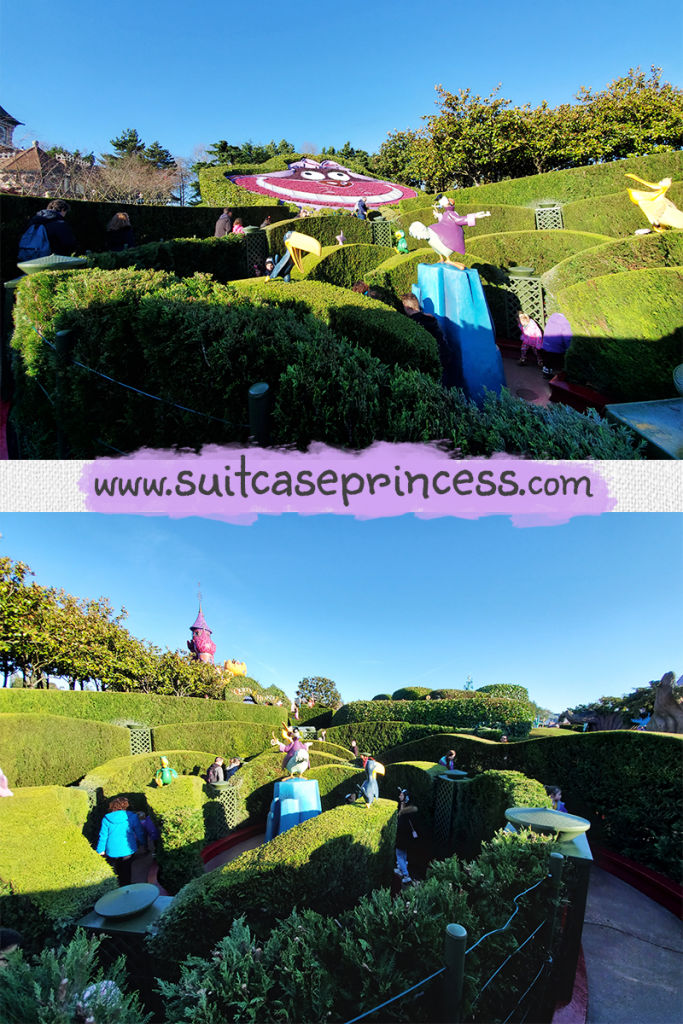 Pirates Cove is a play area that was sadly closed while we were there but we still enjoyed seeing it and slipping into Skull Rock. 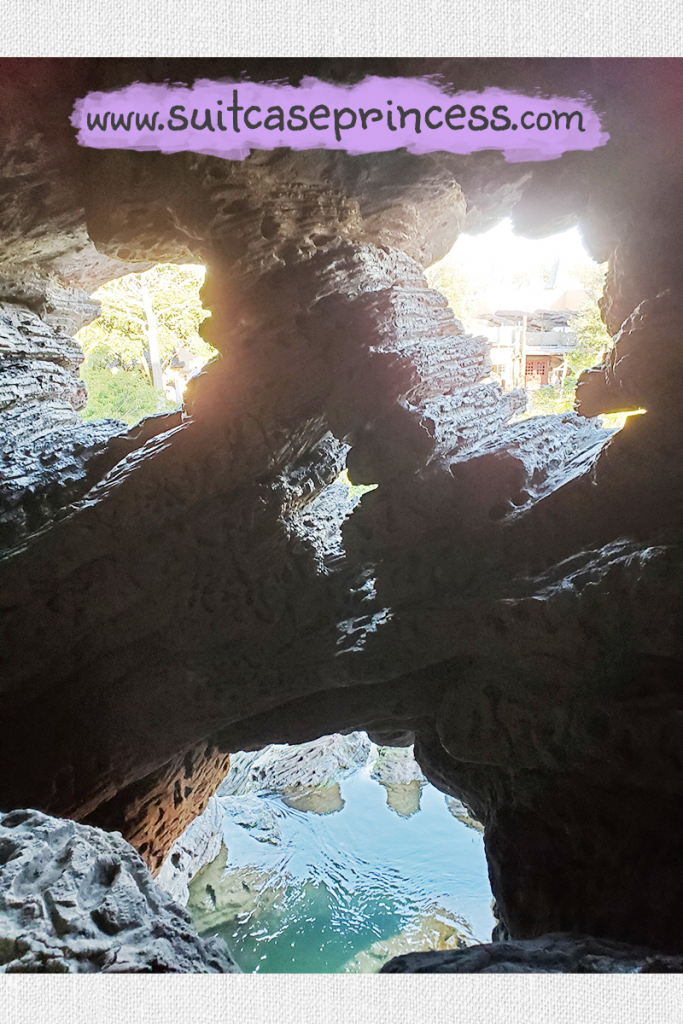 Tomorrowland has a more steampunk feel and features a Nautilus walkthrough. 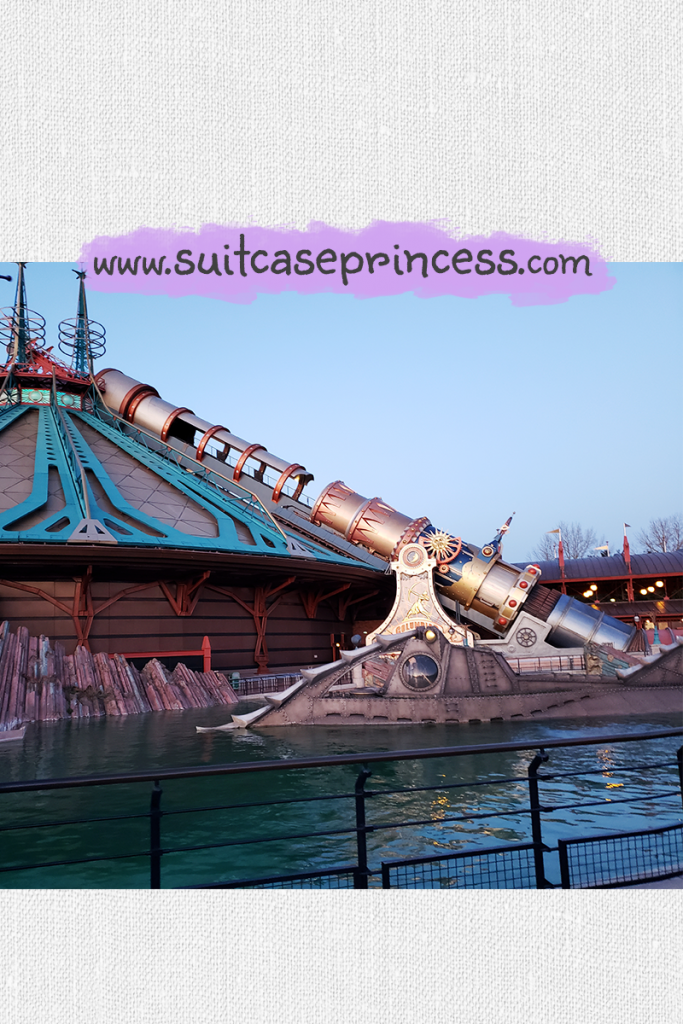 We love to see characters in the parks! We usually seek them out and fill autograph books we enjoy flipping through for years after. I had forgotten to grab my click sharpie, pen of choice, out of our stored backpack. However, this wasn’t an issue. We saw many characters walking around, lined up for meets, including PRINCE ADAM!! Somehow, we didn’t feel the need to take the time to greet them. With such a short window we prioritized the things that were unique to Disneyland Paris. We did happen upon the Queen of Hearts. 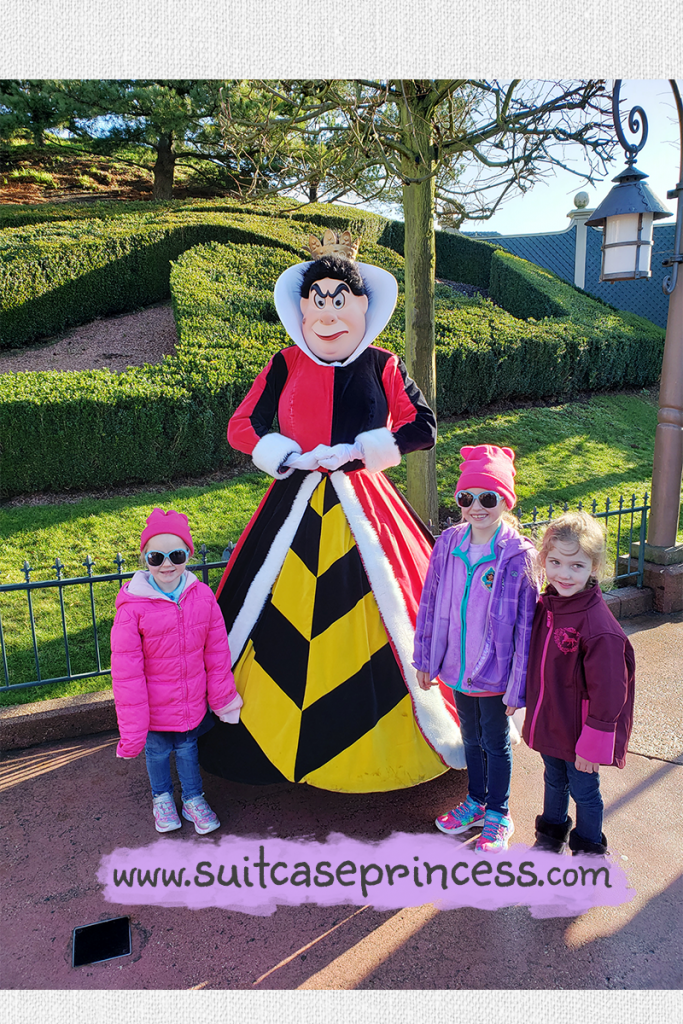 As I had mentioned before, I had signed up for a meet in the Lineberty App. Once it was our turn, we headed over to the meeting spot near Phantom Manor. We got to meet a unique Mickey! Phantom Manor Mickey. 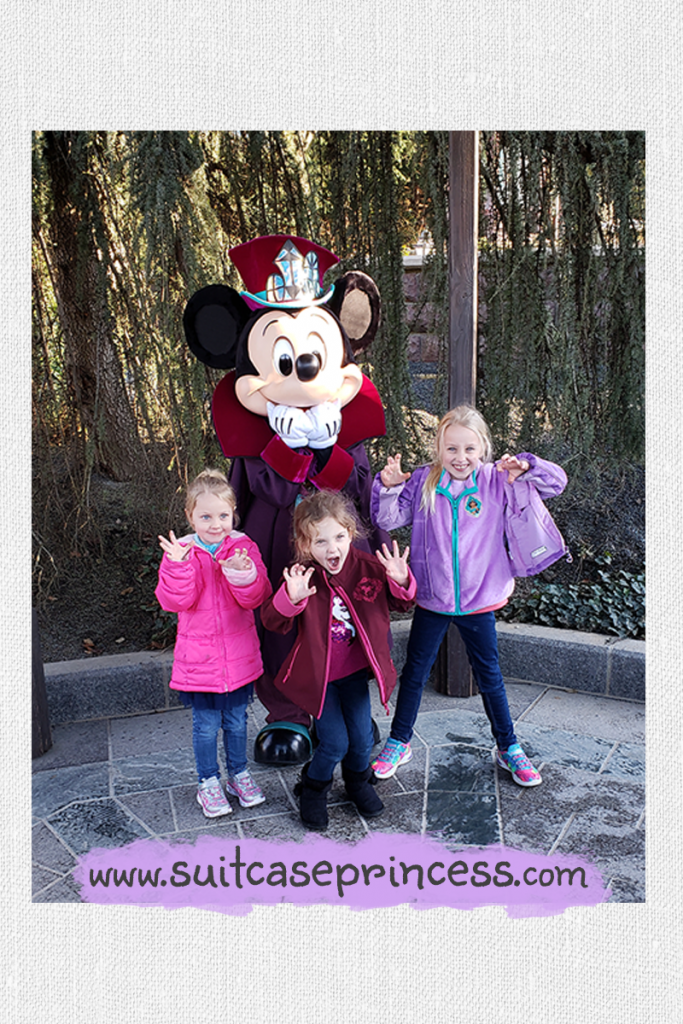 These were our only 2 greets of the whole day. Again, unlike our usual Disney plan but perfect for our Disneyland Paris with Kids plan.

At the end of our very full 8 Disney hours, we settled in to enjoy Illuminations. If you are at all familiar with Disney Parks, they specialize in nighttime shows and fireworks. This show was no different. Projected magic onto the castle, well-known tunes, and fireworks telling us all a wonderful story before tucking the park into bed. 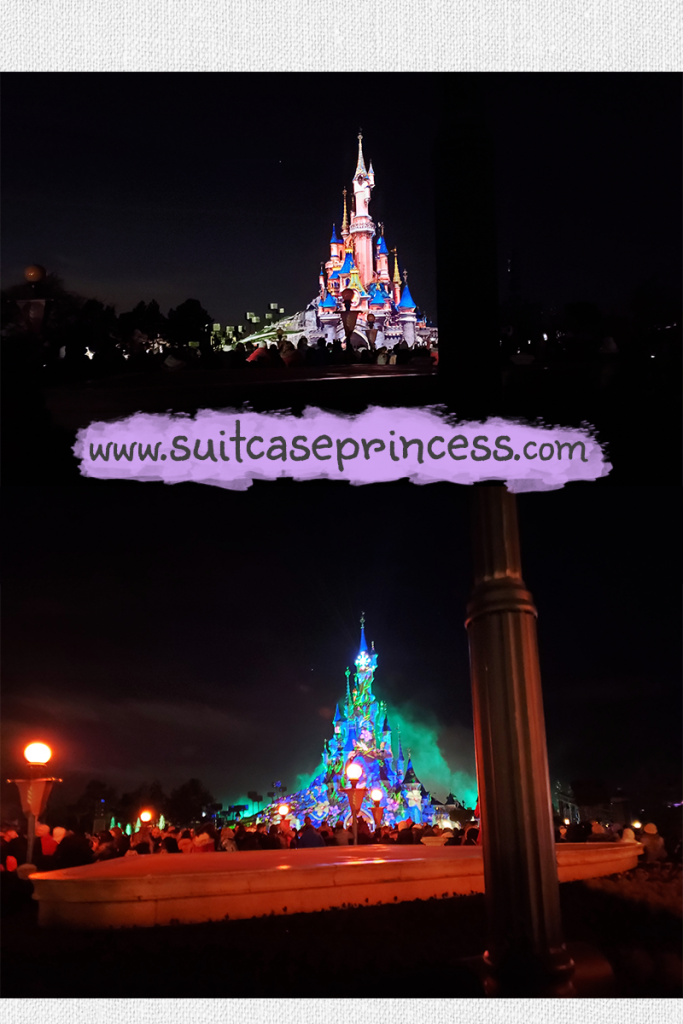 After closing Disneyland Paris with Kids

The plan for the day was to eat breakfast in the hotel, snack again at Starbucks pre-opening, eat our packaged brought along snacks for the day, then head to Disney Village for dinner. We didn’t want to waste our little bit of park time trying to sit and eat a meal. This plan worked pretty well but man, we were ready to eat dinner! We headed over to Earl of Sandwich. We seem to only eat here on Disney trips! It is good, inexpensive, warm, and has food my picky kids will eat! The place was packed but quick and efficient.

Once full, we drug our worn-out selves back to the station for the long trek back to the hotel. Some of us didn’t quite make it. 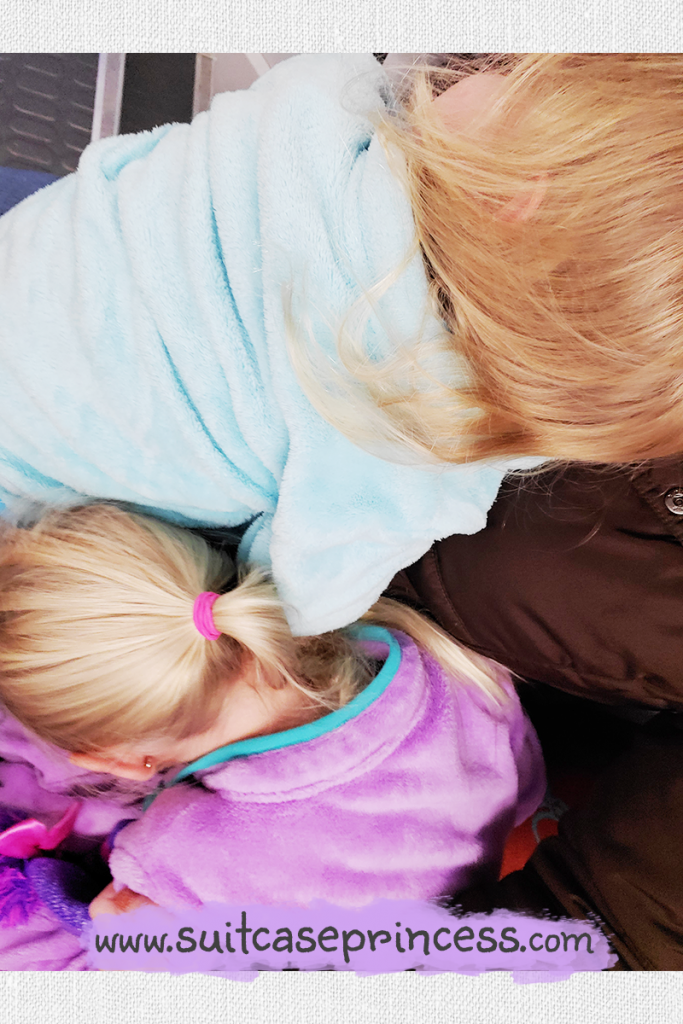 We arrived at about 9 pm. Showered, settled, and got ready for round 2 at Walt Disney Studios! 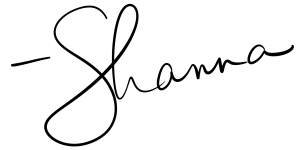