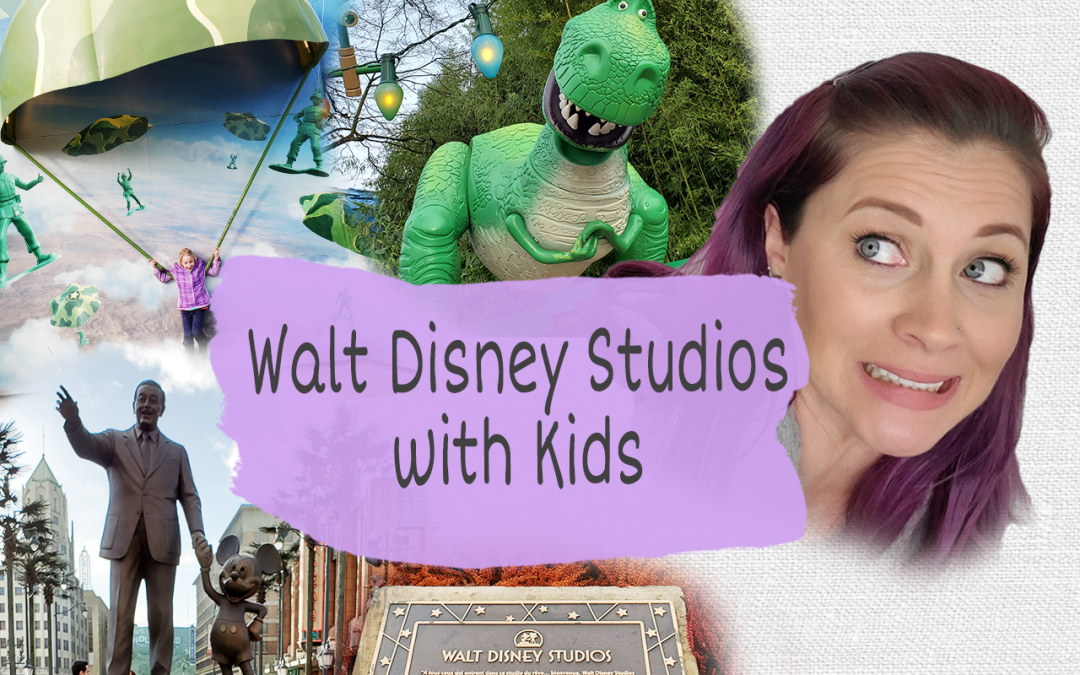 Prep and Research for Walt Disney Studios with Kids

Read my take on Disneyland Paris

I will try to not rehash the same info.

Walt Disney Studios most closely resembles Hollywood Studios in Walt Disney World. It takes on a lot of the old Hollywood style and feel. Traveling in the offseason means reduced operating hours. The park hours were 10 am-6 pm. 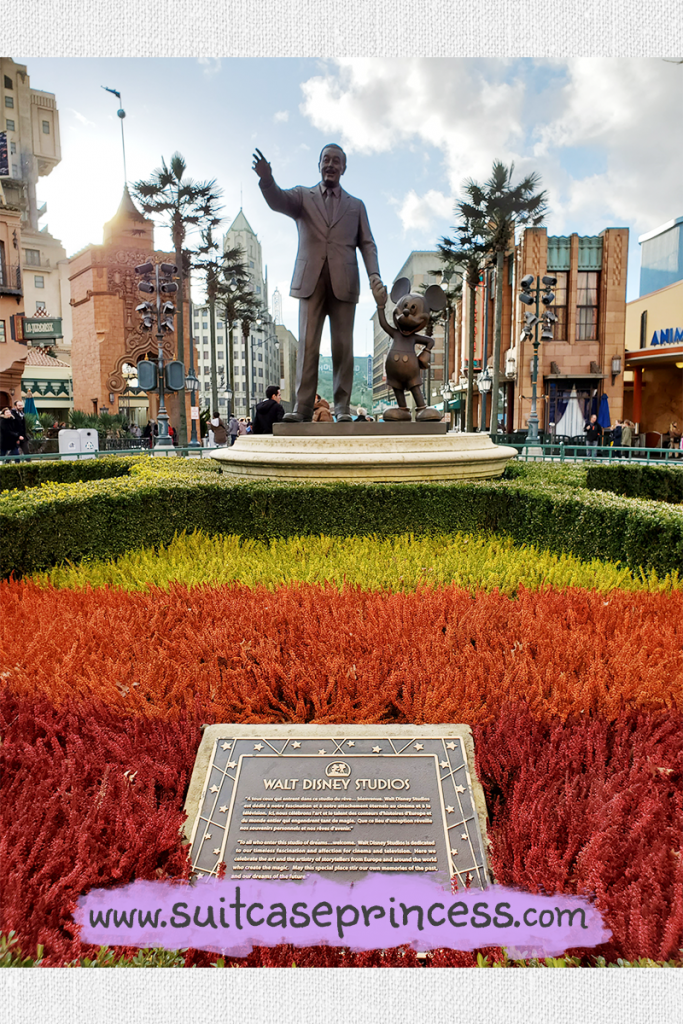 For an in-depth look at how we saved money on tickets, go here

Day 2 meant no Bestie Fam Extras and just our core 4 person group, 2 adults and 2 kiddos to truck around the parks.

We got up, dressed warm, had breakfast, and headed to the magical train to Disney. Just like the day before, we packed 1 bag for the train and 1 bag for in the parks. The princesses were a bit more subdued on this trip. 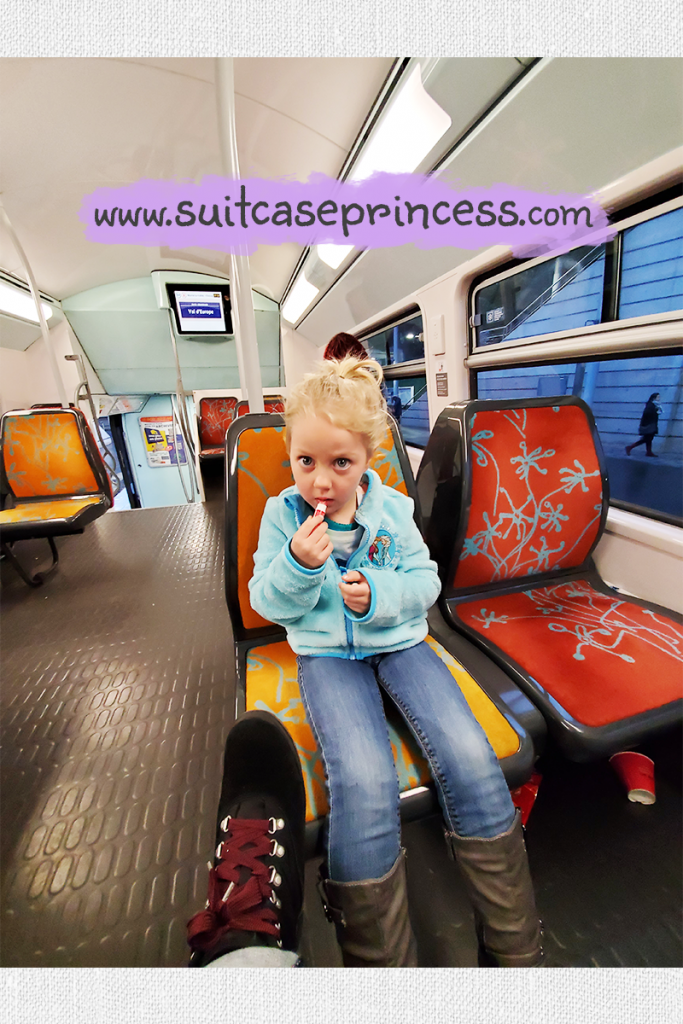 You can find more about that here: We Survived a Transportation Strike! Planes, Trains, and Cars with Kids

We again arrived early, this time, however, we were met with larger groups of kids. I believe they were school groups since it was Friday. A quick scan led us right into Disney Village.

We headed down the walkway in Disney village to the Starbucks. I purchased myself a caffeinated beverage and grabbed waters to fill our reusable and collapsible travel bottles. 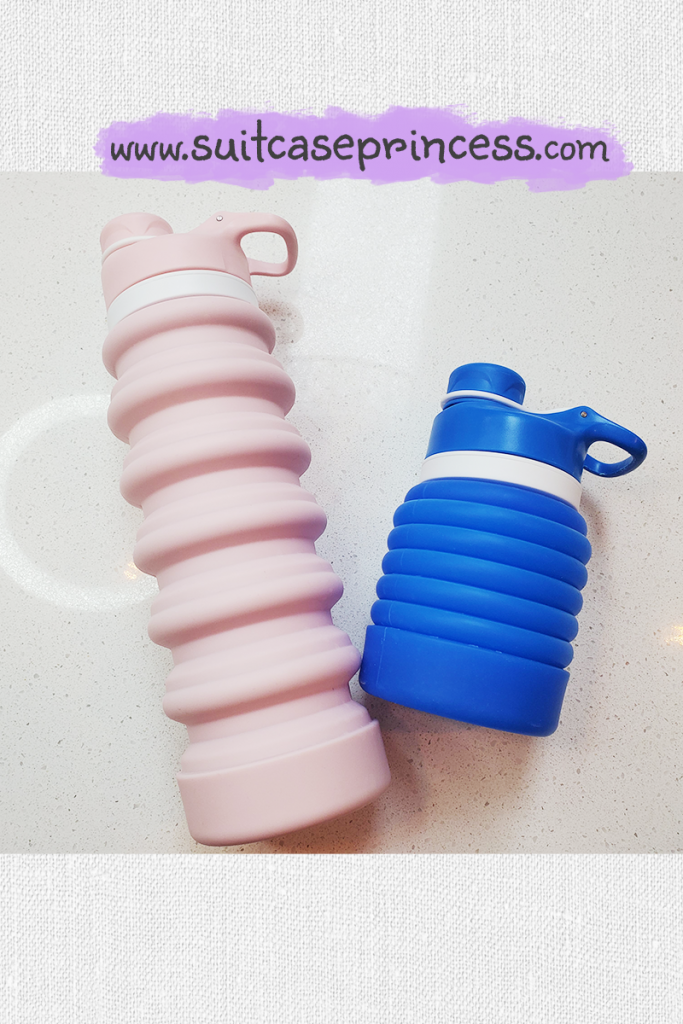 It is worth noting that rain was anticipated for both of our park days. We managed to escape it the first day. Not so fortunate on our second day. While waiting on coffee, Paul was forced to pull out the rain gear. We had ponchos, waterproof boots, and a stroller cover which has come in handy more times than I can count!

Swinging past Studios to again go drop off our bags with Luggage Storage, we then headed to the main gate of Walt Disney Studios!

Once scanned in, I opened up the Lineberty App and secured a meet and greet for later in the day, character unknown.

All of us dressed to impress in rain and winter gear, we headed straight for the busiest ride in the park, Crush’s Coaster. 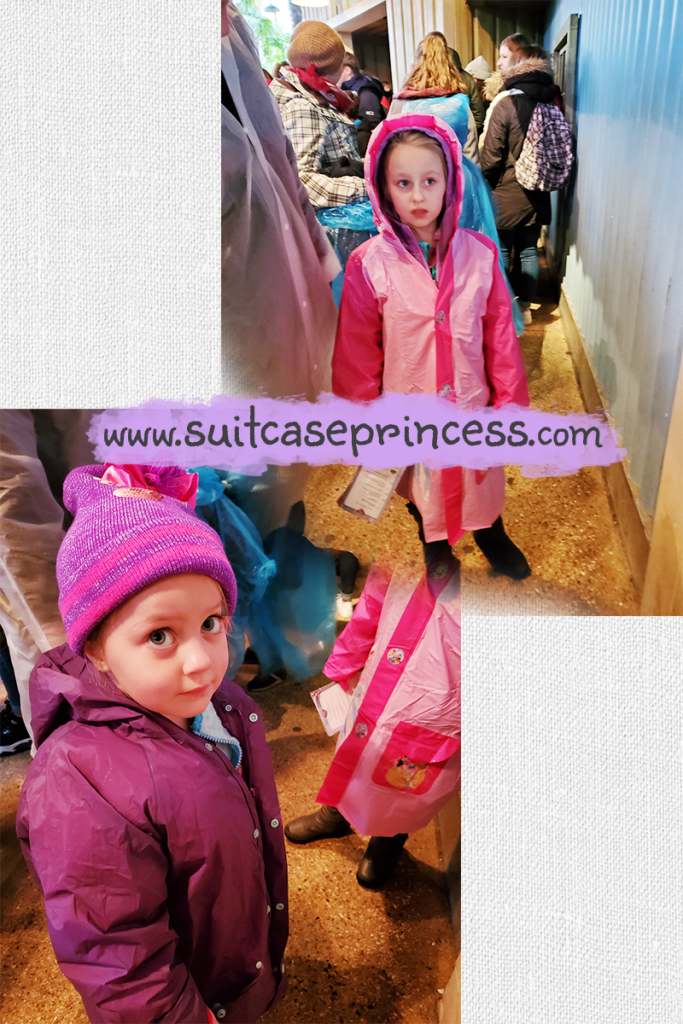 If you have been to Hollywood Studios in WDW, you know how the park features a walk-up Hollywood Boulevard similar to the Main Street entrance of Magic Kingdom. Walt Disney Studios also featured this classic Hollywood Strip, however, their boulevard was actually in a large sound stage type building. Several mainstays were featured: shops, restaurants, and of course neon lights. 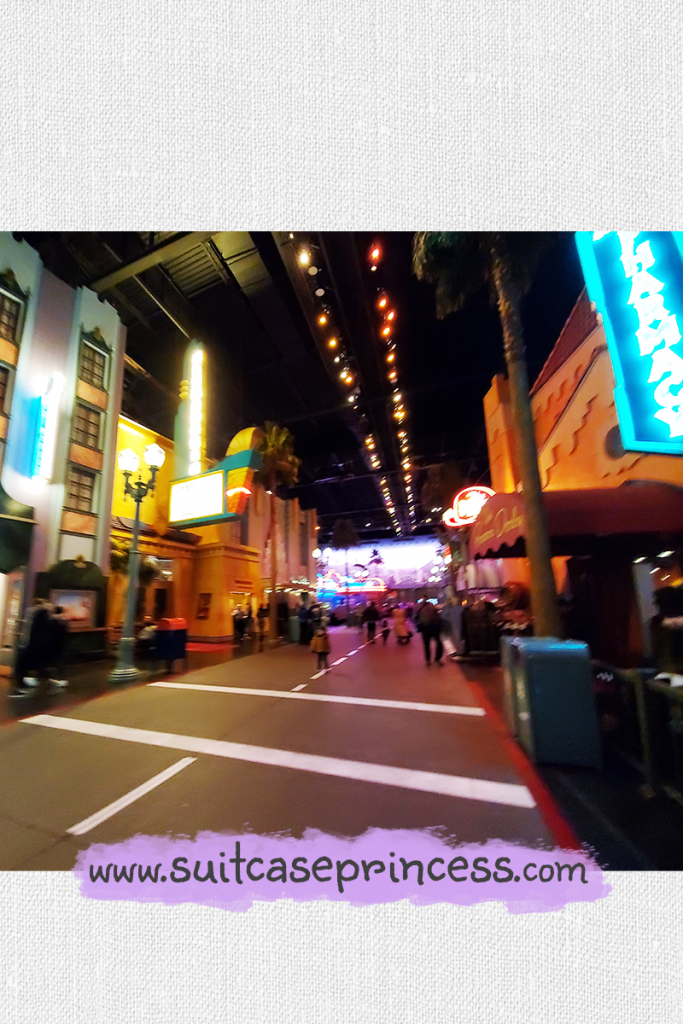 In the distance you can spy the iconic Earful Tower. The Mickey and Walt statue famously situated in front of Cinderella’s Castle in WDW is featured here as a nod to the name of the park, Walt Disney Studios. A reminder that it is all thanks to a man and a mouse. 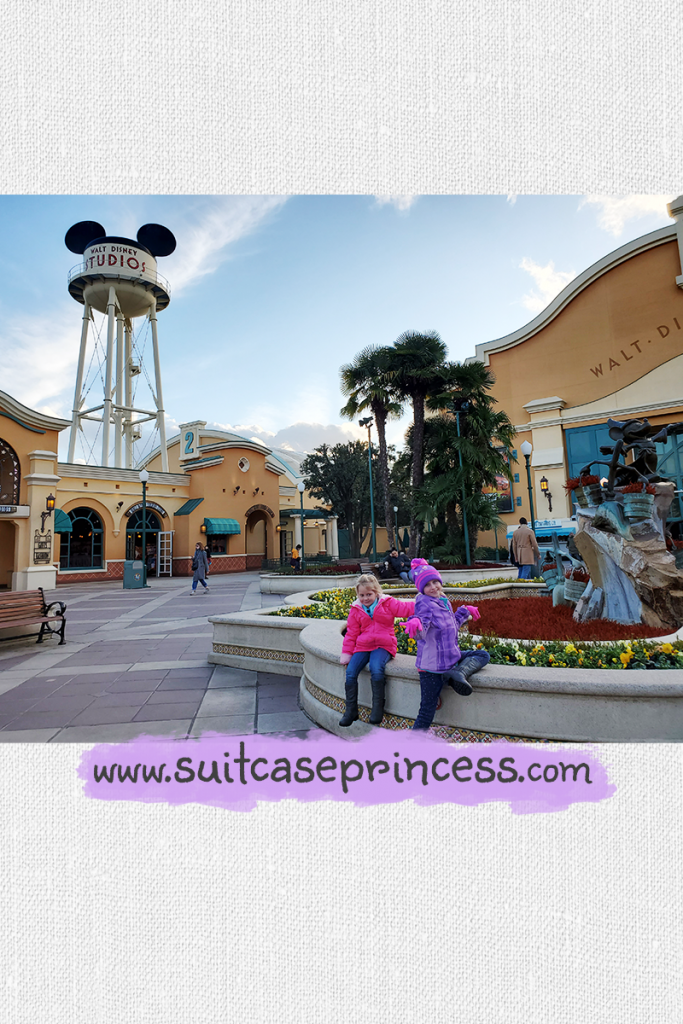 Walt Disney Studios has a Frozen sing a long show. While similar to its WDW counterpart, this show centers around the main characters and us helping to surprise Elsa. Of course there’s snow and a good bit of magic. 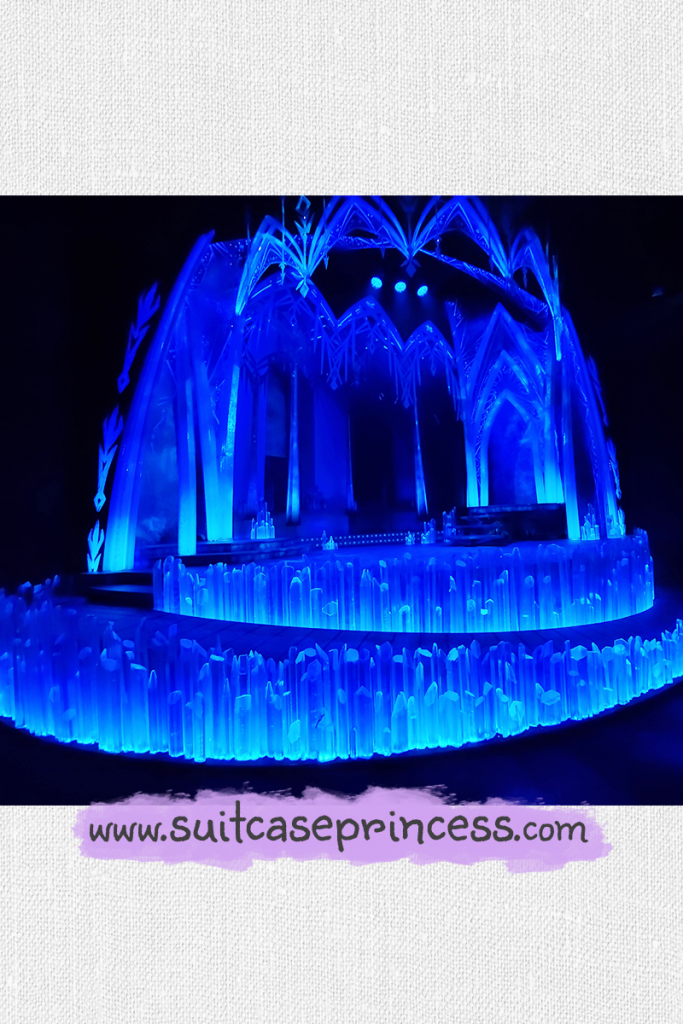 The Hollywood Tower of Terror stands tall above the park as an imposing threat. We headed over to ride and were quite happy to find that while the ride system is the same, the movie and story are quite a bit different. This Tower of Terror has in my opinion, a bit more of a horror movie feel. There is a young girl who follows you through your ride warning you of your poor decisions. In my book, it’s creepier!

When ready for a snack, we headed over to the EPCOT-Esque Ratatouille area and found red tented booth kitchens. While similar to the Food & Wine Festival hosted by EPCOT every fall, the Winter Gourmand features European Winter Foods. Billing itself a ‘Taste of Winter.’ 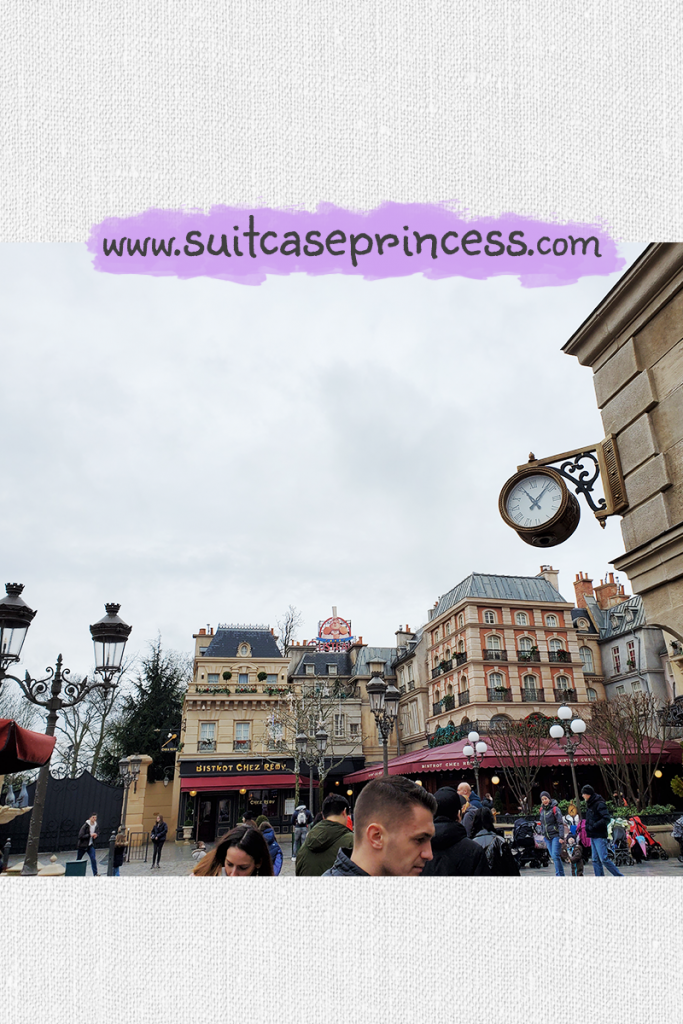 The most popular ride in the park is Crush’s Coaster. The wait time, when we walked in and went directly there, was already at 50 minutes. The ride loads in a perpetual motion style like Nemo and Peter Pan. This really helps keep the flow going. The ride vehicle is an actual turtle shell that fits 4 people. The closest description I have is Primeval Whirl. We were not sure Marilyn would make the height for this ride but did with ease. This carnival-style ride takes you into darkness and throws you back outside again to whiz past guests walking by. It is intense and very fun. 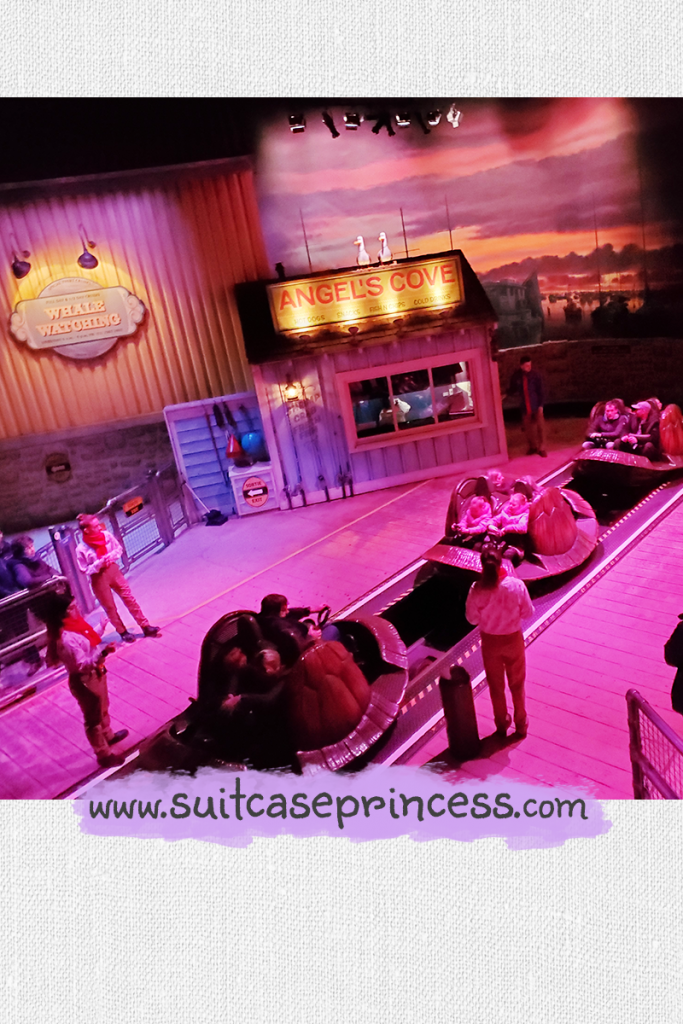 These next few things I am listing as unique to this park because they were at the time they were built. These have all now or are about to spread to other parks across the world. It almost feels like Paris was the place to try them out before taking them global.

Located opposite Crush is a tiny ride that as soon as I saw it knew that it is a similar ride system to Alien Swirling Saucers at WDW and Mater’s Junkyard Jamboree in Disneyland. The little ride is themed to cars and named Cars Quatre Roues Rallye. It was quick and fun. The themeing is very strong with the line queue and you can tell that it was a precursor to Cars Land in Disneyland California. Opening only a year after the premiere of the movie Cars and 4 years before the California counterpart.

Toys Story Playland is another example of things that happened in Paris first. There is an entire area of Toy Story themed rides and the entire area is made to make you feel like a toy. There is a Toy Soldier Parachute Drop, RC Racer ride, a Slinky Dog Zigzag Spin, a tunnel made to look like a Barrel of Monkeys and a Rex perfectly posed for photos. Opening a year before the Toy Story Land in Hong Kong Disney and 8 years before the Florida version. 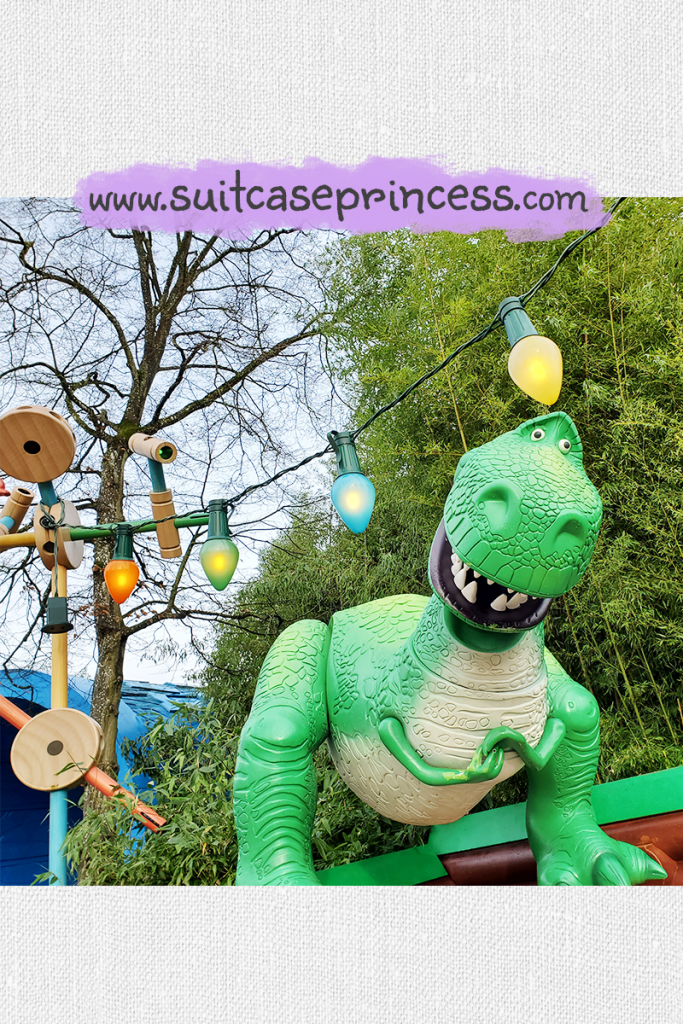 Pic taken by the toddler🤯

If you follow Disney World news at all, you know that EPCOT is receiving a french pavilion expansion and an addition. That addition is a new ride named and themed after Ratatouille. Tucked into a little corner of the park and surrounded by building that scream EPCOT, we found the original!

This ride uses trackless cars, 3D, objects, and screens to make you a mouse running through a french kitchen. I can absolutely understand why they are bringing this ride to the states. It was so unique, honestly a fresh take on a ride system. I believe Rise of the Resistance is a system based on this ride. Unlike the usual gift shop exit, you exit adjacent to Gusteau’s restaurant where the chairs are made to look like champagne cages bent for sitting. This ride predates the WDW version by 6 years! 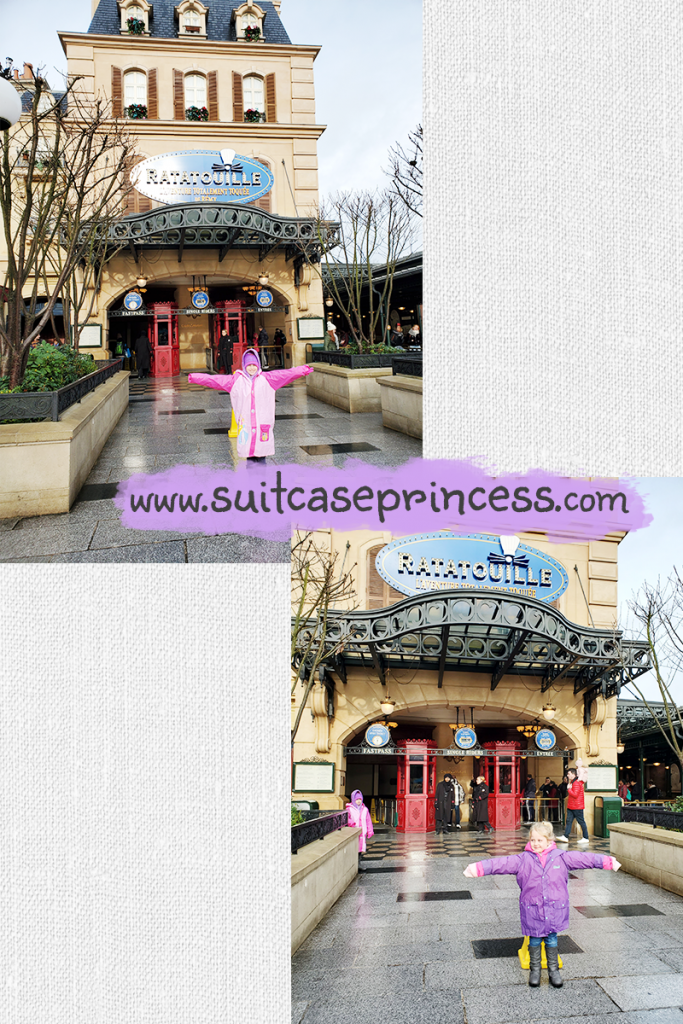 As before, I used the Lineberty App to schedule an unknown character meet. It happened to be Mickey! Somehow we met and posed with 3 characters the whole trip, 2 being different versions of Mickey Mouse. I felt like I got lucky and won the special prize! 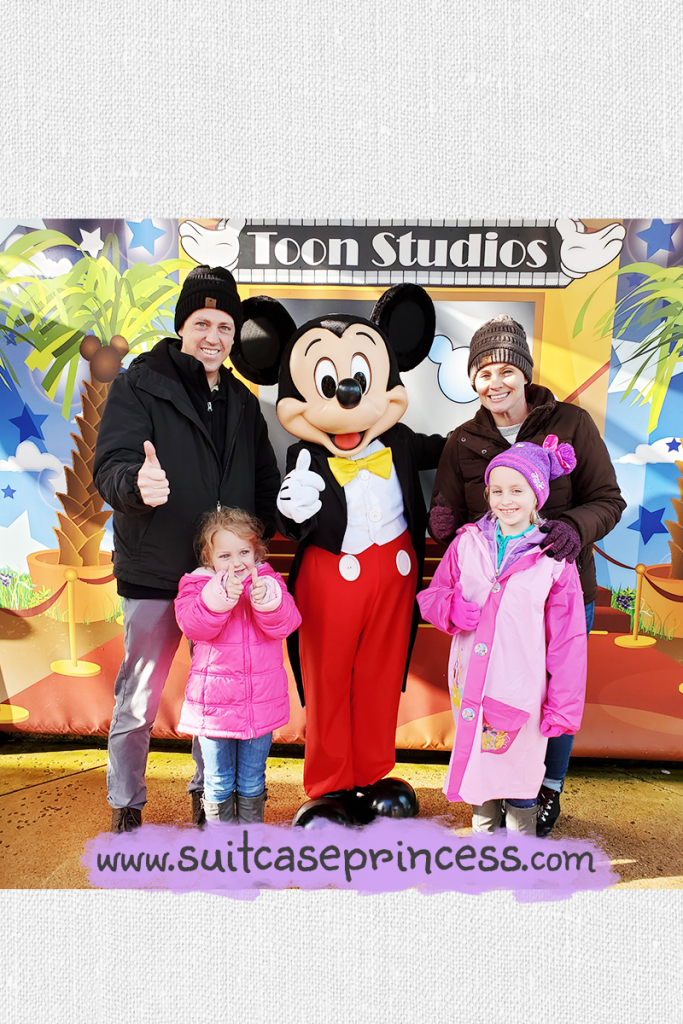 While a nighttime show is offered, we chose to skip it. The hours in the park were short compared to our usual Disney days, but the travel time was long. We hadn’t fully adjusted to the time change. Honestly, Walt Disney Studios Park is just much smaller with much less to do there. We could have stayed a full day and done every single thing in the park. We chose instead to do the unique things, or things we know we love and to bail early. 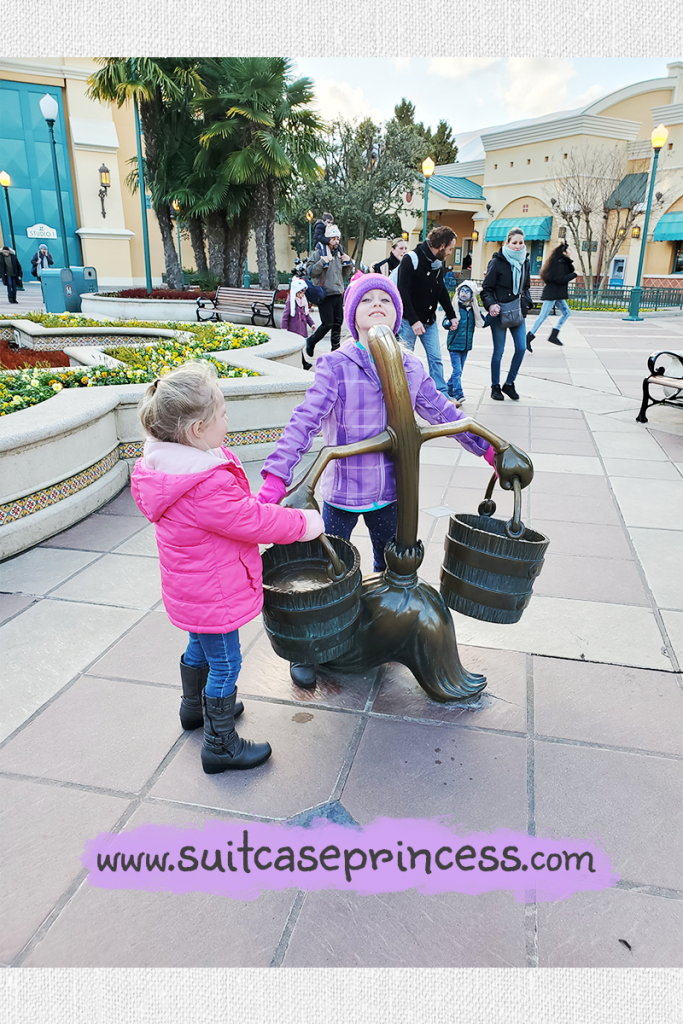 Dinner and Shopping at Walt Disney Studios with Kids

We have a rule that the girls get 1 souvenir from Disney, they have to look all around and be sure that their one thing is the right one thing. After exiting the parks, we somehow again chose to eat at Earl of Sandwich. Being before park closing, it was much easier to find a table. After eating, the girls and I slowly strolled through the shops while Paul ran over to pick up the backpack. We always love to visit Lego Stores, their sculptures are so impressive. We snaked through the princess and girly shops looking at our take-home options. We finally made it down to the World of Disney store and made our souvenir purchases. I decided on a photo album since we never got that autograph book and a key chain to use as a Christmas ornament since I couldn’t find any ornaments. Amelia chose a glove and purse combo in a Belle theme. Marilyn had us go back to a previous store for a Frozen snow globe. Paul splurged for the reusable shopping bag that says “Disneyland Paris.” 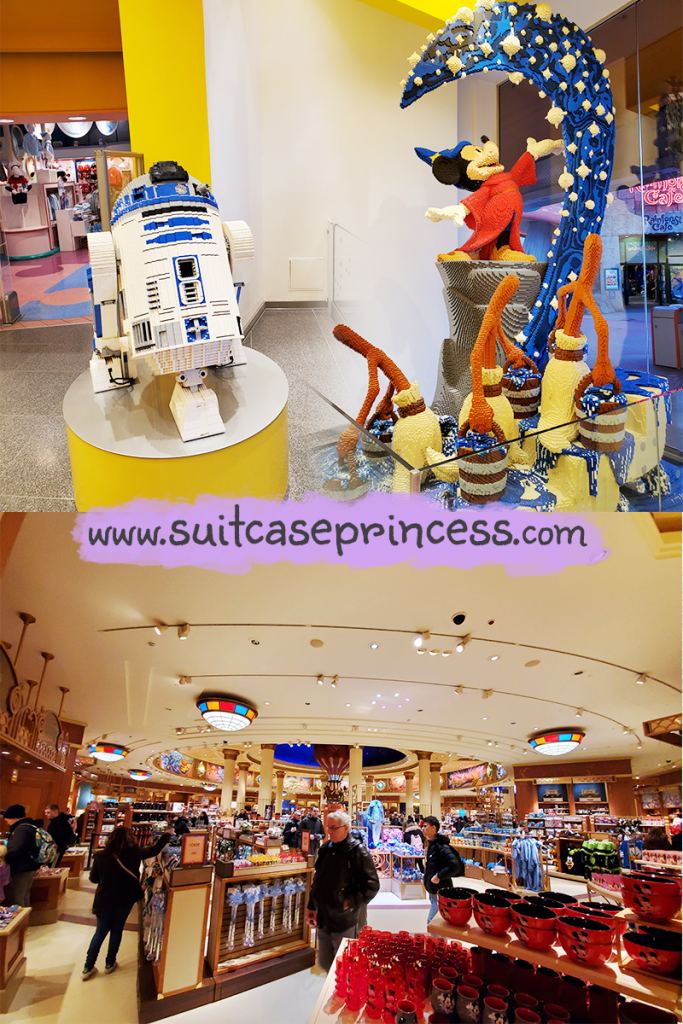 We knew when to quit

Yes, we left early. I don’t even feel bad about it.

This kept the girls a bit more manageable and let us get an early start to the following day. We try really hard as parents to choose the path of the most success. That term can have many meanings. We were pleased with what all we accomplished and wanted to avoid as much stress as possible both getting back and getting up for Paris Day 4! 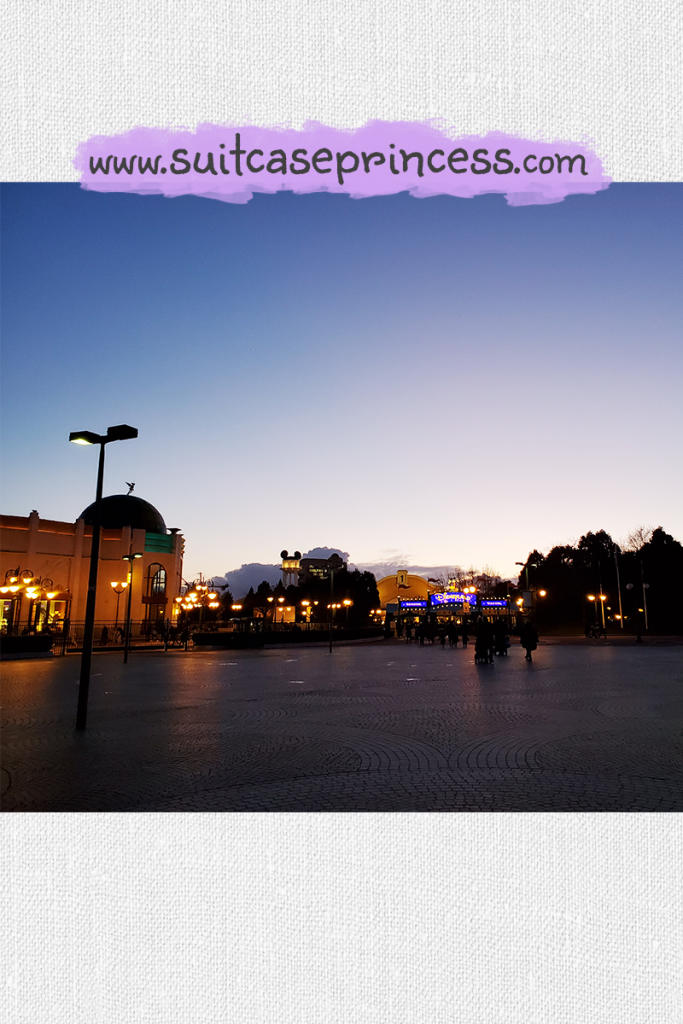