30 hours in New York with Kids 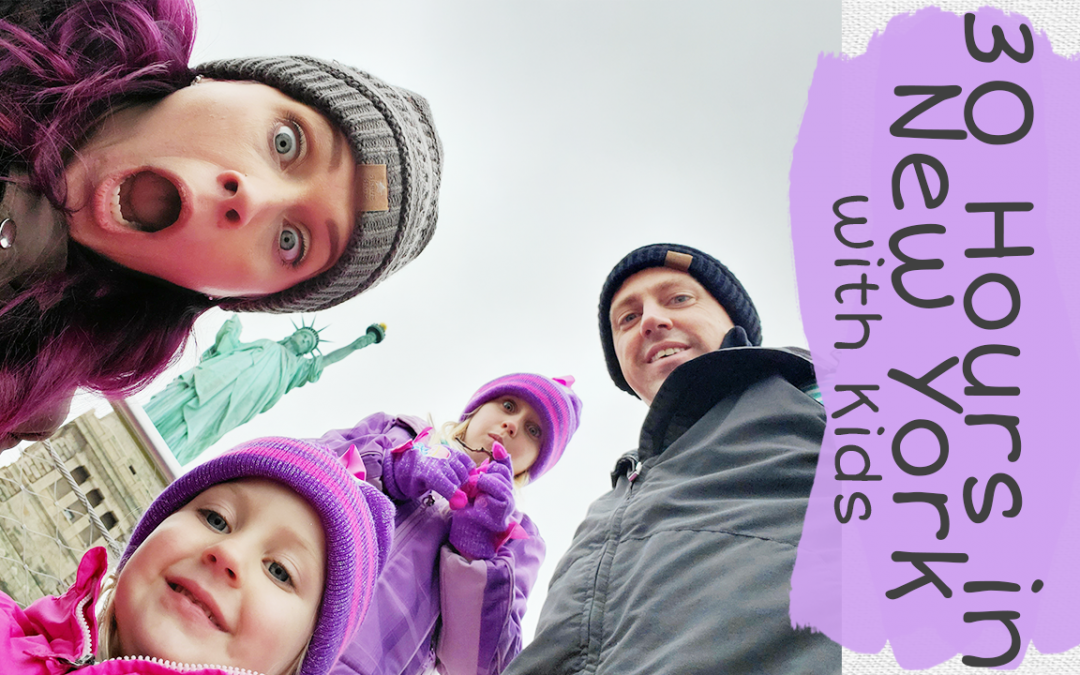 The first leg of our first international family trip involved a stay in new york that clocked in at just over 30 hours. That’s right, we had 30 hours in New York with kids and we were determined to make the most of it!

If you are wondering how this all happened, a brief summary is that my long term bestie, Nick called. He is an avid vacation deal stalker, had found some pretty darn cheap flights to Paris from New York. He called, started with the customary greeting of, “Does everyone have their passports?” Since, indeed, everyone does have their passports the conversation naturally progressed into plans for taking both of our families with young children to France. For good measure he included a few more branches of his family tree and we landed in New York with 7 adults and 3 children. Our travel party had 1 Magic Mama (yours truly,) 3 Dads, a Grandma, 2 Tias, and 3 Fabulous Princesses. 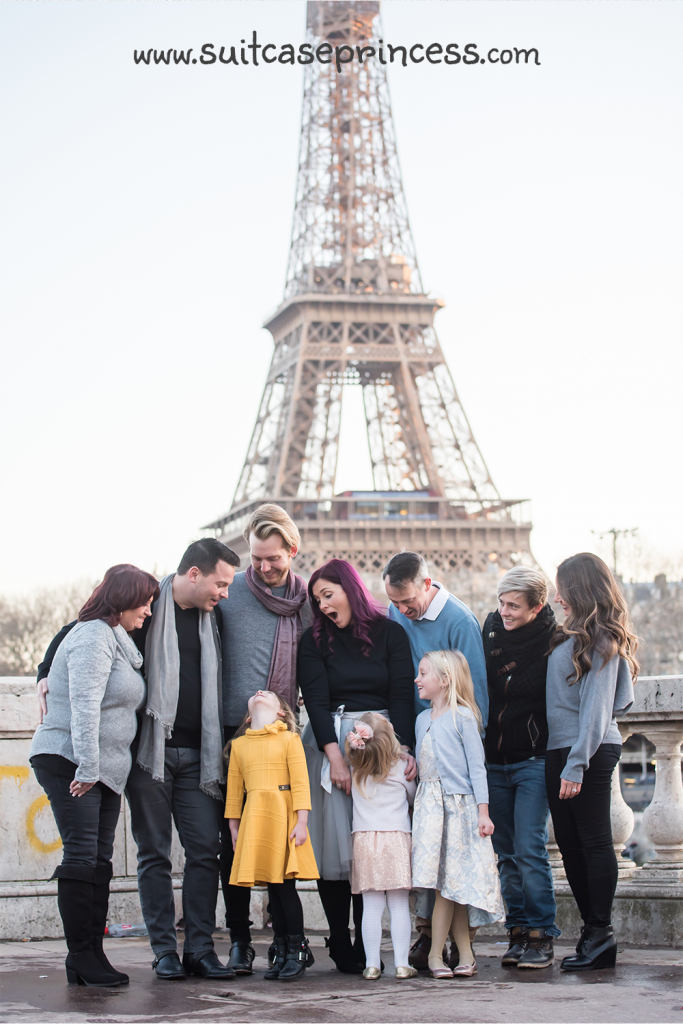 How our Paris trip was possible can be found here

Fun tidbit, the day before we were to depart on our super awesome multi-family international vacation, Marilyn started feeling under the weather. We took her into the dr, got her checked, approved for travel but bit our nails for the next few days. We did everything we could to keep her happy and comfortable.

This little turn of events definitely affected the beginning of our trip. Because of this and the impending jetlag we chose to take our 30 hours pretty easy. We absolutely could have done more with our time but since we had some extra drama sauce on our plate we chose to pace ourselves.

If you have been here for a bit or know me personally, you know that I advocate for those first flights of the day in the pre-dawn hours. I love to get up and get to the airport. Traffic is lighter, there is less chance of flight delays, and there is none of that terribly long waiting for stuff to happen later in the day. I highly recommend, if you can get your self up early, to get on those very early flights. We love Southwest and with Southwest those first od the day flights also tend to be lowest priced. I will choose to take the first direct flight of the day to our destination and the last late evening direct flight home. These are usually the lowest cost flights. So our travel day began at 3:30 am with that painful alarm clock going off. We loaded the princesses into the car and headed off to the airport!

Our babes know how to load the plane, settle, and the whole process so we were ready for our 3-hour flight to LaGuardia. 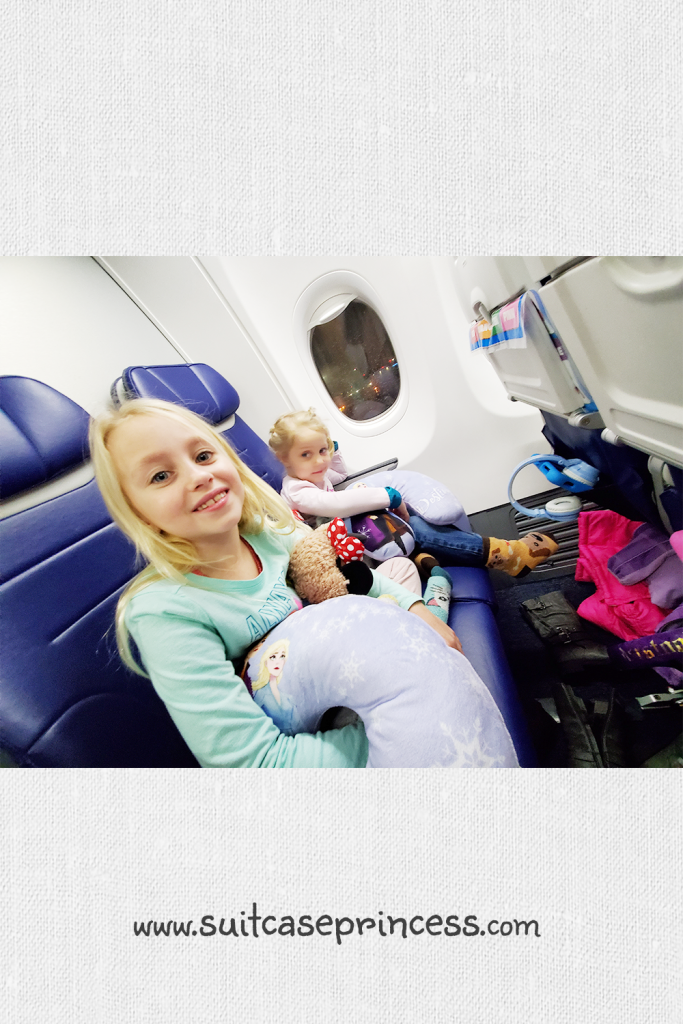 Notes on Airports in New York

Southwest does not fly into JFK, which is where we would be flying out of to Paris, so we did visit 2 different airports in New York. LaGuardia has a great play area for kiddos. Not enough airports take into account how much a little physical activity and energy-burning can contribute to successful traveling with kids. 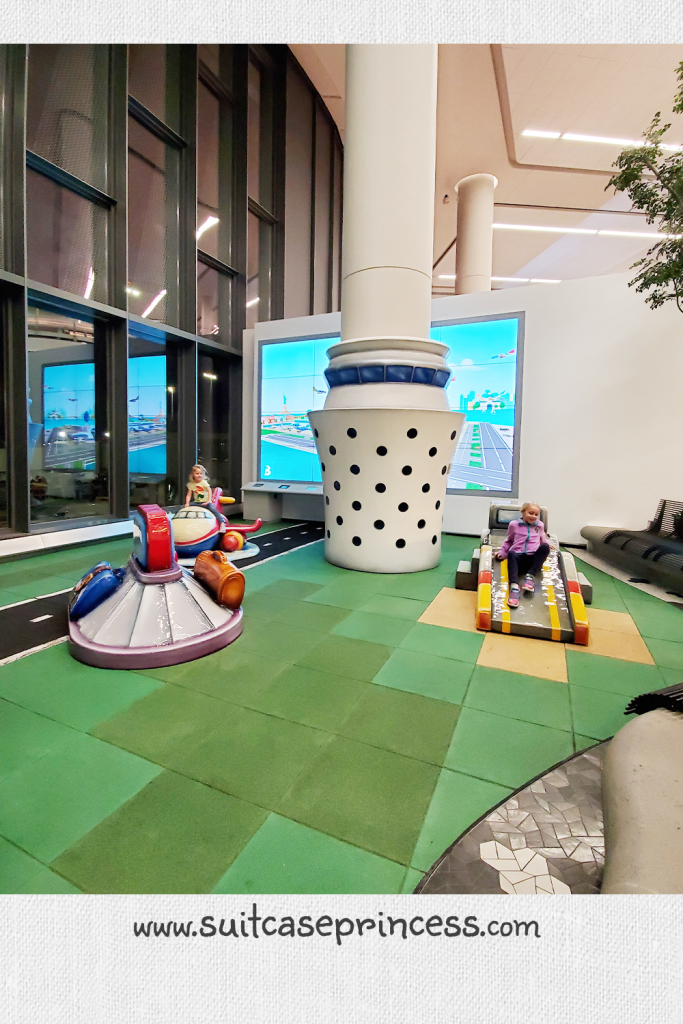 Once we landed in NYC, we gathered our group, our luggage, and headed to find a taxi to the hotel. The normal taxi stand area was under construction so they were using a bus to shuttle people to a parking garage to catch a ride. Luckily, the handicap loading area was still there onsite and the strollers got us into that line. It took us 2 jam-packed and full yellow cabs to get all our folks on the road. 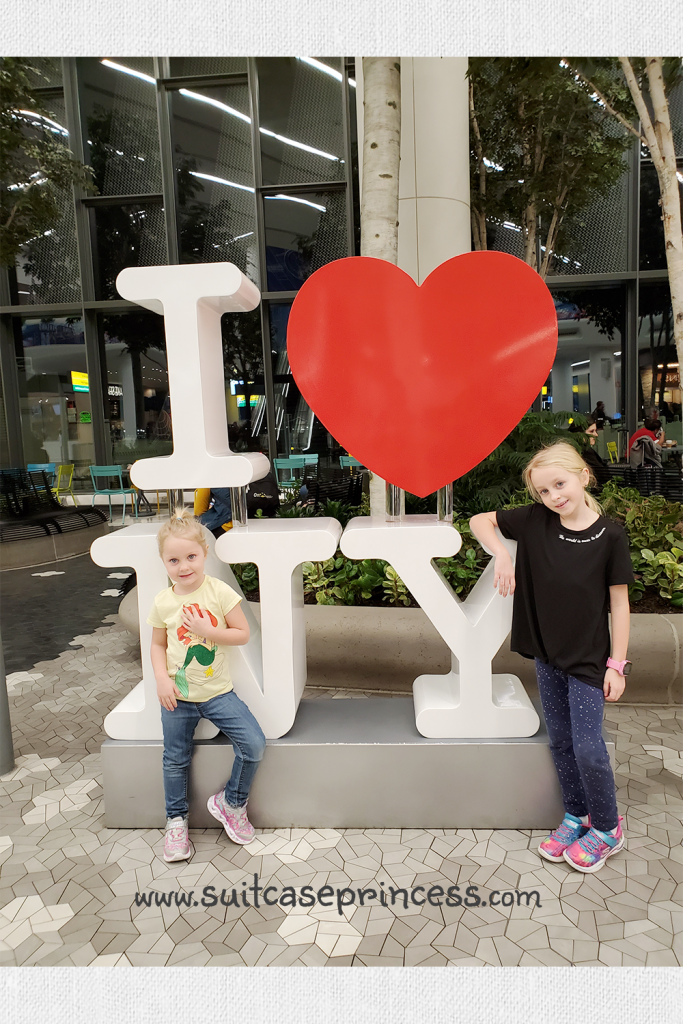 Some of our party did not and it made me very very thankful that we had only a few bags to manage and they fit everywhere we took them.

Nick travels for work and has like 1 gagillion hotel points with Hilton so he kindly booked our stay. The hotel had free breakfast, which I always recommend when possible. They gave us an early room to store our luggage since we arrive long before check-in time. The absolute best thing they did for us was allow us to have a late enough check out that Sleeping Beauty Marilyn could sleep as late as she wanted and then lazily get ready to keep us up all stinking night on our red-eye to Paris. 😩

We dropped the baggage and headed out. Around the corner we found a great pizza counter where we grabbed some pie and ate on the street corner. After our lunch, the bog group of us split into our family units and headed in our separate directions. Normally, I am a super planner with every single minute accounted for. Somehow, that just never materialized for this trip and honestly it was a blessing! Our plans needed the flexibility that salvaged our entire trip. Between Marilyn being a bit down and jet lag all around, the lack of firm commitments was our saving grace.

Tips on how we got around can be found here 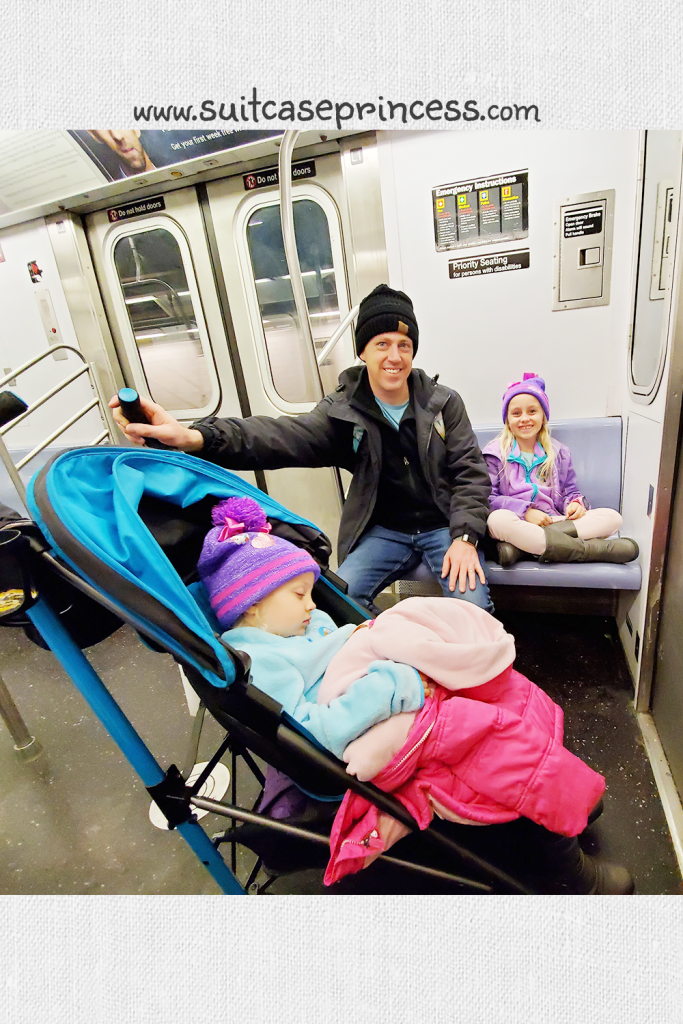 Her Right Foot by Dave Eggers

Last year I saw a great recommendation for a “Mighty Girl Read” called her “Her Right Foot” by Dave Eggers. This book takes a wonderfully illustrated look at the little known details and symbolism of the Statue of Liberty. Our girls love this book! I highly recommend it and it can be found here:

We knew that we wanted to take the girls to do some classic New York things. I am not the person who avoids tourist traps. There is a reason those things are popular and iconic. Those are the things I want my babes to see. So that when they see references and pictures in their everyday lives, they can say they have been there and done that.

We headed to Battery Park via subway. Let me briefly say, ONLY USE STATUE CRUISES. They are the only legit, get you to the statue cruise company.

They can be found here: https://www.statuecruises.com/

We were damn near suckered, no I guess we were suckered into using a different company. Luckily we got a refund and were able to do more for much much less.

Story on us being total tourist suckers here: COMING SOON

We made it easily through security and onto the boat. Granted, it was mid-week in the offseason and super dreary and cold. Ya know, the perfect recipe for reduced crowds. We made it to Lady Liberty, and were able to get some great pics. Without advanced reservations we could not go inside the pedestal. We didn’t mind since Marilyn was not even tall enough to head to the crown level. Who knew there was a 48” height requirement?!?! Had I not seen that bit, I likely would have paid and reserved tickets in advance just to be disappointed. So check the fine print people! 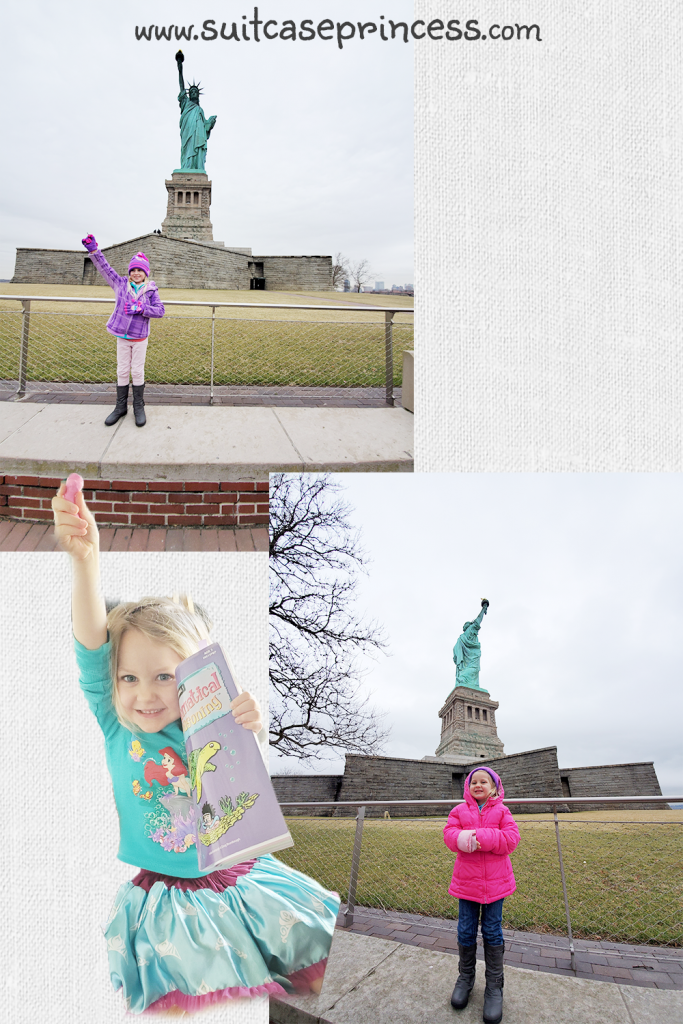 Since the last time Paul and I made it to the Statue of Liberty, long before kiddos, they have built a museum telling the how we got to now story. This museum was amazing! It has so much info, such great displays, and lots for my littles to touch. They also have the original torch. My kids loved this place! 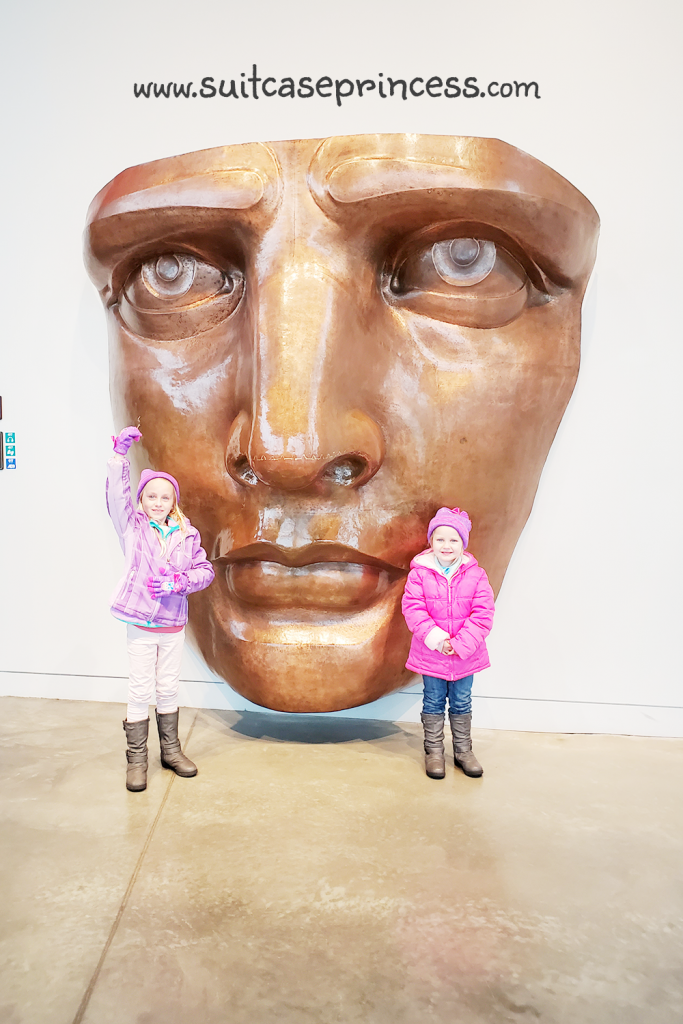 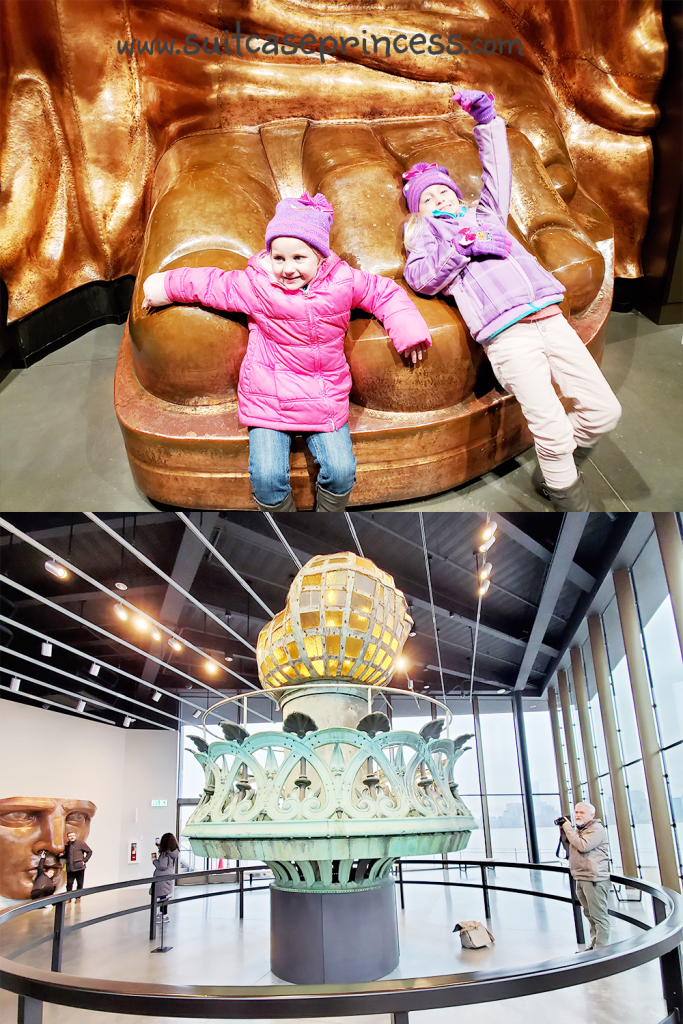 Getting an uncharacteristically late start to our day put us off our game. We had to wait forever on the last ferry back to the mainland and we were all starting to crack. We needed food, warmth, and sleep. I really wanted to show the girls the lights of time square so we decided that we would eat whatever we could find close to there. We took the girls to see the lights but they were pretty over it by this point. We headed into Hard Rock Cafe because, they had a predictable kids menu that I could use to pacify my girls. Also, immediate seating!

We munched on chicken tenders and chocolate milk then headed back to the hotel to hit the hay.

Usually in hotels I am an early riser! I was up, ready, and downstairs eating the included breakfast by about 7 am. Paul had stayed behind with Marilyn who took one look at us and passed back out.

I took him back up some food and we made a day plan. It had occurred to me the day before that we might be able to open the Times Square Disney Store.

We quickly realized that Marilyn needed the rest more than the outing and Paul volunteered to stay behind. 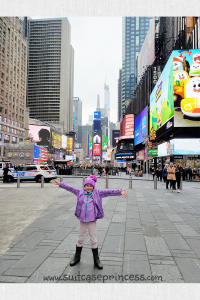 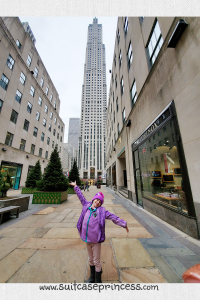 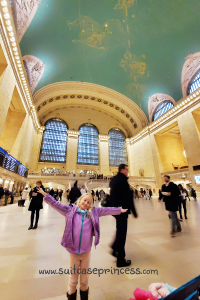 Amelia and I headed out into New York City. Our hotel was close to grand central and made for quick trips around. This was great because we got a later than ideal start to our day. We headed straight to Times Square to Open the Disney Store! It was pure magic! Absolutely recommend an add to your bucket list! It was free to do and we have an amazing memory, not to mention a great souvenir! 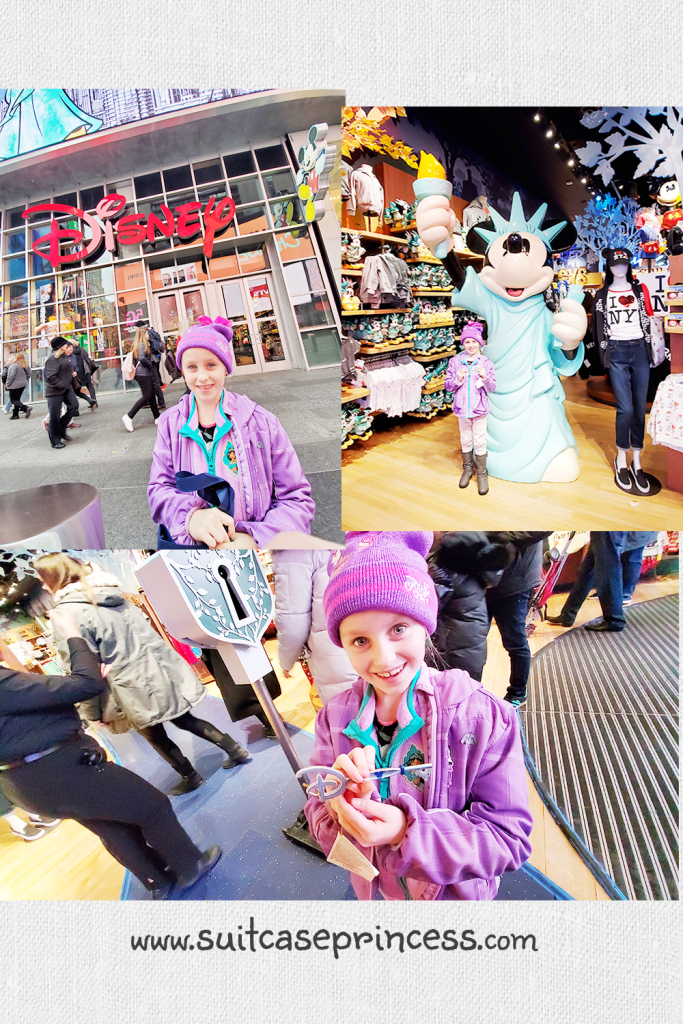 You are more than welcome to use the restrooms of the places that you are a customer of. I encouraged Amelia to go in the Disney Store, with nice clean bathrooms. Naturally, she refused. Guess what?!?!? Waiting on the platform for our arriving train, she decides that it is an IMMEDIATE NEED! So, we found the bathrooms in the subway. 😱

Just don’t! I do not recommend! We survived that with no infections known to date.

Having checked in with Paul and heard that M was still snoozing, we headed to our next stop for the big girl. American Girl has become quite a large part of our lives these last 2 years so naturally we needed to hit the flagship! We arrived just after opening on a Tuesday morning so the store was pleasantly deserted. We scoped out every floor, grabbed a newly released Joss book, and took so many pictures! 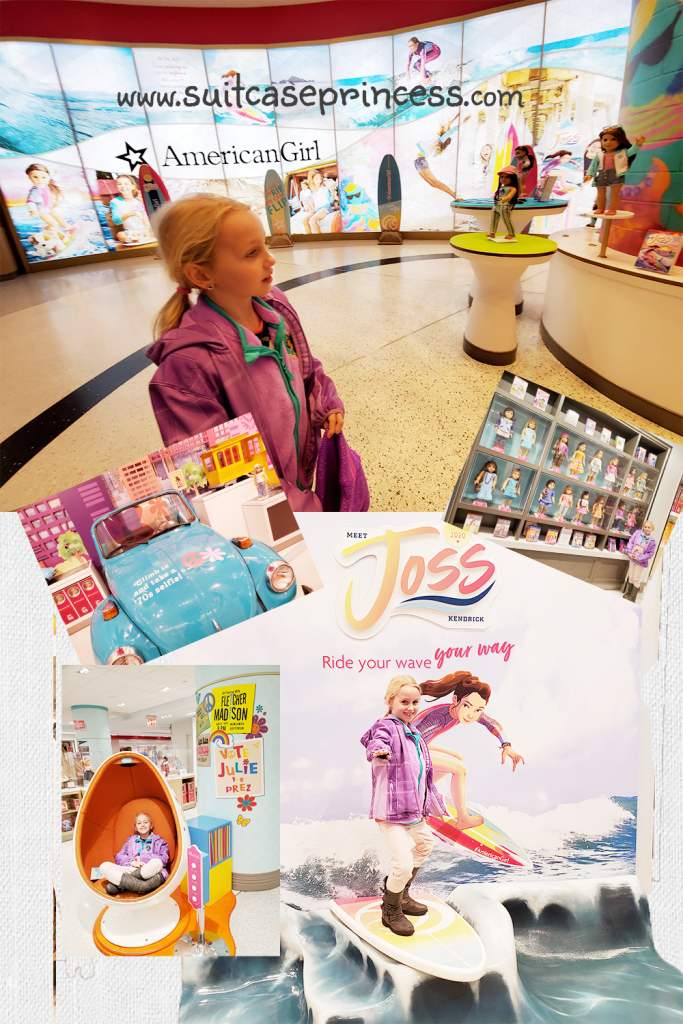 This place was huge and guess what?!?! They had miles of clean sparkling potties!

By the time Amelia and I had had our fun, we needed to get ready to get to the airport. We met Paul back at the hotel and Marilyn was up and happy by then. Amelia and Paul walked down the block to grab us Chick-Fil-A. We ate in our room and then packed back up to get on with the trip!

Let me say, we have TSA PreCheck and it is absolutely worth the money! Had I known that the Global Entry program was about the same price and included it, I would have absolutely gone that route. Having this prescreened clearance allows you to keep electronics in your bag, keep your shoes on, and take kids under 12 with you at no charge. This made our lines so much faster. With kids, shorter lines are GOLD!

Please remember to subscribe for more travel news and tips!